Another round of interrogations for Postmaster General Louis Dejoy in emergency hearings regarding a downgrade of USPS operations.

After pressure from both Senate and House members on both sides of the aisle, Postmaster General Dejoy, who has no experience working in USPS issued a statement: “To avoid even the appearance of any impact on election mail, I am suspending these initiatives until after the election is concluded.”

However, members of Congress pointed out that Postmaster General Dejoy did not provide any plans to restore services. “He refused to reinstate the sorting machines, mailboxes, and other infrastructure he ordered removed,” said Rep. Carolyn B. Maloney (D-NC), the Chairwoman of the Committee on Oversight and Reform.

Last Friday, the new postmaster general answered a series of inquiries in the GOP-majority Senate, but expects to be grilled in the Democrat-dominate House today.

Rep. Alexandria Ocasio Cortez (D-NY) who will question Postmaster General Dejoy at the hearing said her office took a survey from her district to find out about constituents’ experiences over the past months. She heard from a number of residents on the agency’s failed mail services. One constituent reported the following:

Medication was mailed on 7/20 and a month later it has not yet arrived. The tracking shows no updates since 7/28. I had to request a replacement shipment, which arrived but not before I had to buy a small quantity of the medication out of pocket.’ 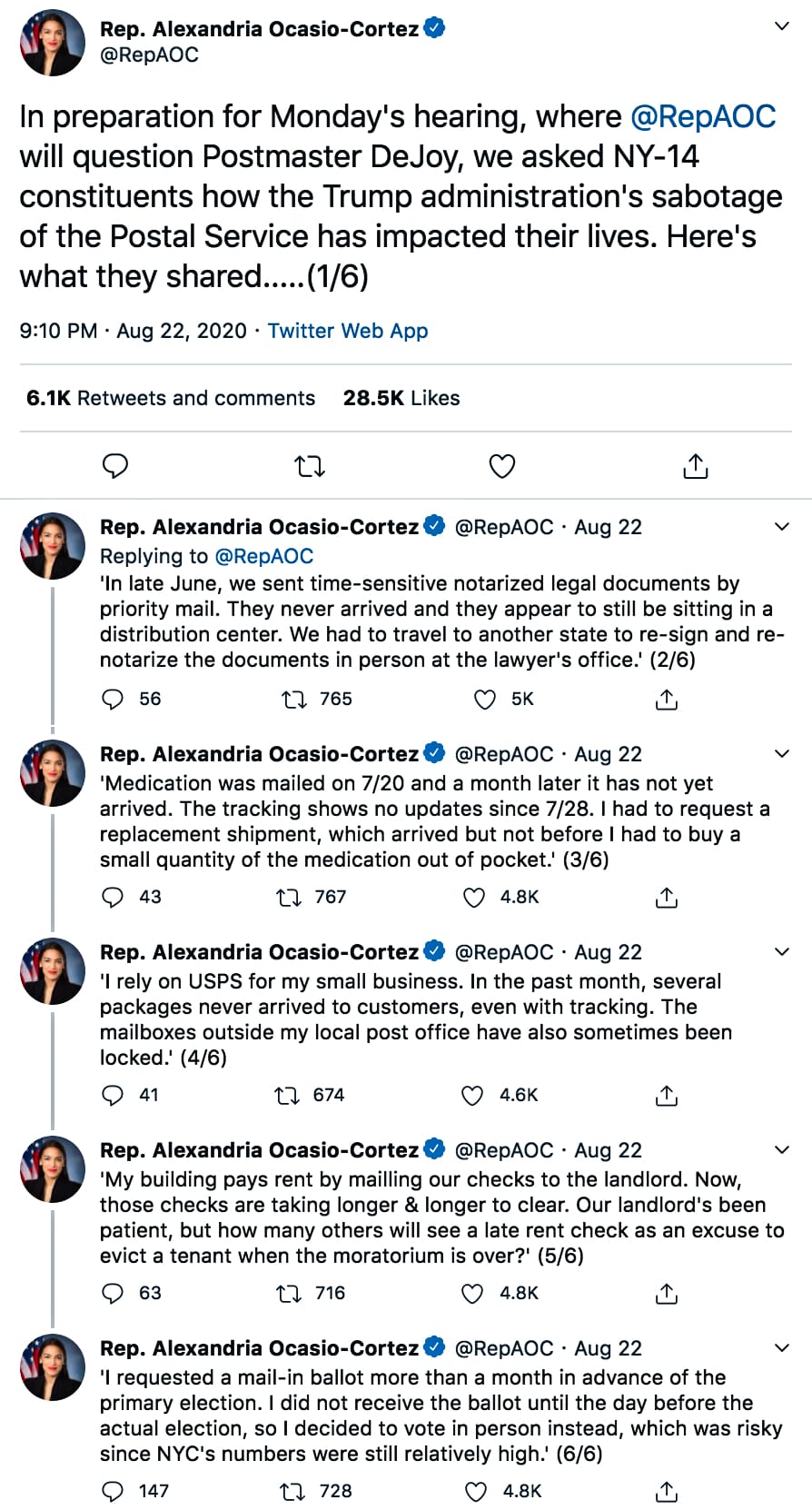 More concerning is how the severe gutting of postal operations will have an impact in the coming November elections. “It is also unclear whether other possible changes—including how the Postal Service will prioritize election mail—will continue,” expressed Rep. Maloney.

For months, reports across the country detailed late or no mail-in ballots, along with missing or delayed prescription orders and other essential deliveries. Ark Republic’s digital bake sale facilitated by Chef Cassandra Loftlin experienced critical losses. Due to almost a dozen failed deliveries the Georgia-based chef “had to re-mail cakes to several donors,” said Chef Cassandra to Ark Republic. 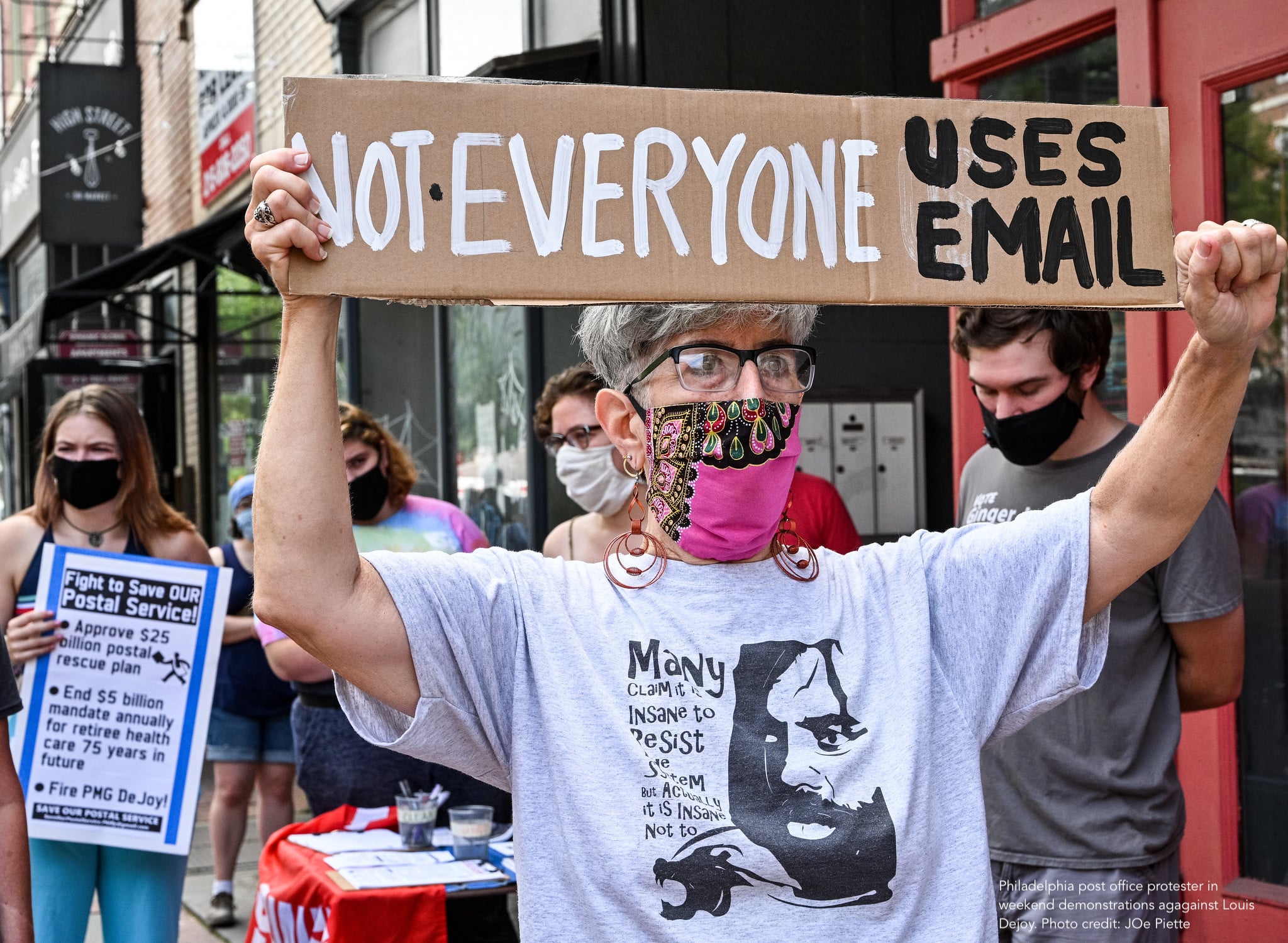 The protests in Philadelphia were part of a National Day of Action which drew over 650 protests across the US on Aug 22, 2020. Demands stated that Congress needs to: 1. Approve the $25 billion rescue plan; 2. Repeal the ridiculous 75 year pre-funding requirement; 3. Fire Postmaster Louis DeJoy for delaying the mail. Events were sponsored by the American Postal Workers Union, MoveOn, NAACP, Rural Organizing, SEIU, Working Families Party, Indivisible, Vets for the People, and the Leadership Conference on Civil and Human Rights. Photo credit: Joe Piette

During the coronavirus pandemic, USPS asked President Trump for $25 billion to keep operations. He denied their request. This past Friday, the House passed the, Delivering for America Act, a bipartisan bill funneling $25 billion to the agency. Though it will likely be denied by the Senate, that side of the Congress is on summer recess until the beginning of September.

Elections have come and gone. Well sort of. So where do we go from here?

Kamala Harris is the most disrespected woman in America | Think Piece

Kenosha, Wisconsin up in flames with police shooting of Jacob Blake