Hanukkah is not the other white Christmas, but this still is an important time of the year for Jews.

As we approach the end of 2020, there’s a collective sigh of relief from folks I’ve talked to, an ever-growing glint of hope in their eyes, that 2021 will bring some much-needed change from all the misery this year has brought us. Either from the pandemic or politics or the great social and civil divide that has gripped this nation for far too long, we’re all just tired of all the doom and gloom this year has given us and are ready for some change.

Some people might scoff at the idea of me of poo-pooing the sense of joy and good cheer at a time when we all seem to desperately need it. However, I assure you, I do love the Christmas season, even though I’m Jewish.

But I have to say, the sheer idea of Christmas in America can be a bit overwhelming, especially if you’re not Christian. Any non-Christian holidays, such as Hanukkah for example, are relegated to a single end-cap shelf in retail stores. At stores, the holiday typically with items that may or may not have to do with the holiday; Menorahs, dreidels, chocolate gelt, matzo, gefilte fish, Kosher salt, Simon & Garfunkel’s Greatest Hits…if it’s remotely Jewish, put it on the Hanukkah shelf!

Many non-Jewish people think Hanukkah is one of Judaism’s most religious holidays. But it isn’t. In fact, the holiday of Hanukkah was once considered the Jewish equivalent of, say, Arbor Day.

Okay, I may be exaggerating a bit. But not entirely.

Though it’s gained prominence over the years in the modern American mainstream, most Jews don’t consider Hanukkah as having  the same religious relevance as what we refer to as the “High Holy Days” in the Jewish tradition – Passover, Rosh Hashanah, and Yom Kippur.

“Because of the proximity to Christmas, it’s a season of light, and Hanukkah is known as the “Festival of Lights,” it fits the mold,” says Rabbi Craig Lewis of Chattanooga, Tennessee’s Mizpah Congregation, where I attend synagogue.

But, this isn’t to say Hanukkah doesn’t have its own significance in the spectrum of Jewish traditions. Celebrated for eight days, either in late November or sometime in December, depending on the Jewish lunar calendar, Hanukkah commemorates “the miracle of the oil,” that happened thousands of years ago when there was only enough oil to provide light for one night, but it lasted eight. In my experience when talking with non-Jews, that’s about the extent of what they know when it comes to why we celebrate Hanukkah.

And if I’m being honest, that’s about the extent of what I’ve known, too. Oh, and some guy named Judah Macabee.

But, as you can guess, there’s a lot more to it.

Because I’m far from a Jewish scholar, I’m relying on History.com to provide some more historical context. Having to rely on online resources to recall what is supposed to be common knowledge among Jews, of course, speaks volumes about how seriously I’ve taken my own Jewish heritage in the past.

According to this article, around 200 B.C., Israel—or what was known then as Judea—was taken over by King Antiochus III of Syria. He allowed the Jewish people who were already living there to continue practicing their religion. But his son, Antiochus IV Epiphanes, was less tolerant and banned the Jewish religion once he took over the throne, ordering the Jews to worship Greek gods.

His soldiers then massacred thousands of Jewish citizens and desecrated Jerusalem’s holy Second Temple installing a large statue of Zeus within its walls. Mattathias, a Jewish priest, and his five sons, led a rebellion against King Antiochus IV. Mattathias died and his son, Judah ‘The Hammer” Maccabee, took over and within two years, had driven the Syrians out of Jerusalem.

Judah and his small band of rag-tag soldiers then restored the Second Temple, rebuilding its altar and lighting the menorah,  a symbol of knowledge and creation to the Jewish people. It was meant to be a beacon of light, literally,  and to be kept burning every night. During the Syrians attack on the city, though, it had been extinguished. Though Judah and his followers only had enough oil to finally relight it for just one night, it remained lit for eight. The illumination allowed them to find more oil to keep it lit every night from that time forward, inspiring hope among the Jewish people once again.

Great story, right? With this context, there’s a lot more reason to celebrate during this time of year. But much like Christmas, Hanukkah’s true meaning has been diminished by commercialism and the all-powerful Christmas shopping season. Yes, cooking latkes, decorating your house with Hanukkah decorations, and exchanging presents for eight nights is great. But for American Jews like myself, it can be difficult to separate ourselves from our Christian counterparts.

Growing up and living in the South, and being part of an interfaith family, it’s been especially hard for me. For example, where it’s just assumed that everyone is Christian, with folks saying “Merry Christmas” rather than “Happy Holidays!” Not that it’s ever bothered me all that much, I’m used to it.

Hell, in my house, we have a Christmas tree in our living room, stockings line our fireplace mantle, and lights brighten our front porch. And in the mix, are a couple of menorahs setting in our windowsill  ready to be lit.

Though it has nothing to do with the birth of Jesus, it was inevitable that Hanukkah would become so intertwined with the Christmas season that its identity, along with those who celebrated it, would be reduced to copycat versions of Christmas rituals in the form of Hanukkah bushes and gift-giving.

So, how did this happen? How did Hanukkah become the “Jewish Christmas?”

According to My Jewish Learning, Americans in the late 1800s and early 20th century began looking at Christmas as more of a secular, nationally-celebrated holiday rather than a religious one. To fit in, many Jewish immigrants began incorporating both Hanukkah and Christmas customs into their households in December, with Christmas trees and wreaths, stockings mounted on the fireplace, and gift-giving. 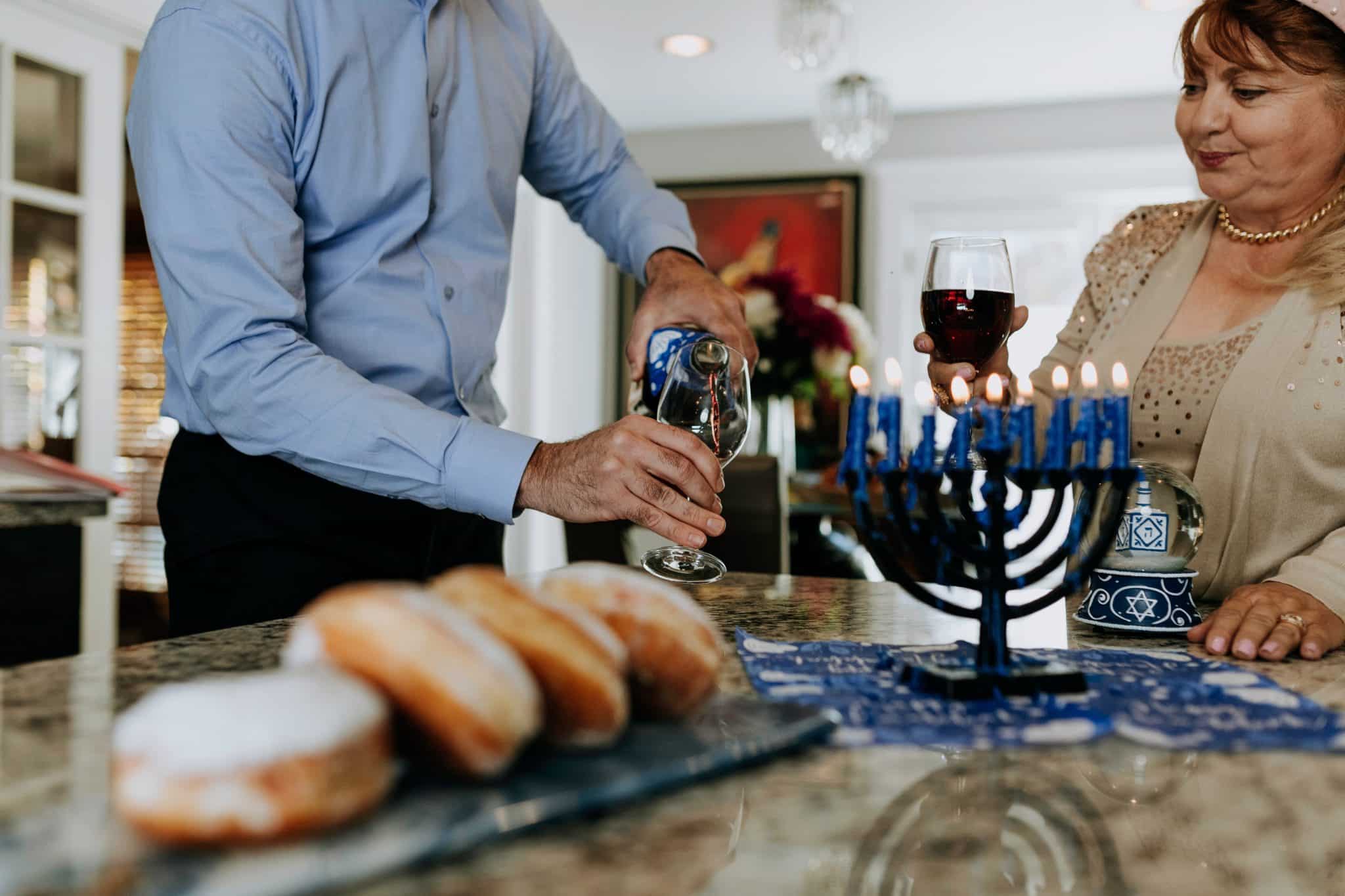 Many American Jews, especially from German descent, hosted lavish parties with dinner, dancing and a concert for their Jewish friends on Christmas Eve. Of course, there were other Jews who chose not to partake in Christmas festivities at all out of fear of losing their traditional Jewish customs they had been holding onto for generations.

But as their desire to become “American” increased with each party thrown, Jewish immigrants began implementing Christmas traditions like putting up Christmas trees and wrapping presents to better assimilate with their already-established American peers, who were predominantly Christian.

Over time, though, this began to change. Beginning in the 1950s, second and third generation Jewish immigrants started feeling that having any kind of Christmas decorations in their households was a contradiction between being American and celebrating their Jewish ethnicity. Since then, Hanukkah has become elevated as a way for American Jews to distinguish themselves from their American Christian peers.

“The iteration of Hanukkah and American Judaism is very different than what it would look like in other countries around the world now, because of the dominant American culture that kind of is pervasive around the rest of the world,” says Rabbi Lewis. “We have influenced other nations too. Hanukkah has been elevated somewhat in its practice. Even in Israel, it’s been elevated somewhat because of what American Judaism has practiced.”

But, according to Brandeis University, over the past 40 years, two specific Jewish groups have brought back the Christmas tree tradition. Russian-speaking Jewish immigrants in America feel it’s important since Christmas trees were viewed as more of a secular symbol of hope because Christmas was banned as a religious holiday in their native country, they see no problem in having a tree and celebrating Hanukkah at the same time.

Intermarried couples where one spouse is Christian and the other is Jewish, also practice this Christmas tradition. I fall into the latter category because my wife was raised Christian. We have two boys, and every year we celebrate Christmas and Hanukkah.

At first, I thought this might pose a problem because not only would it be confusing to them, but we couldn’t buy them presents for both holidays. So we decided to do the gift-giving on Christmas and light the menorah, spin the dreidel, and eat chocolate gelt for Hanukkah. And you know what? My kids love it! They don’t complain about not getting gifts on Hanukkah and in years past, they’ve invited friends over to celebrate with us.

Yes, Hanukkah may not ever hold a candle (sorry, I had to do that) to Passover, Rosh Hashanah, and Yom Kippur, regarding religious significance within the Jewish culture. But, Rabbi Lewis believes there is an ever-increasingly important reason to honor it.

“It’s a holiday that has momentum that our children are excited about and they look forward to,” he says. “So we should capitalize on that and not play Debbie downer and say ‘Well, it’s really not that important.’ Let’s do it up and use it as a launching pad to educate, because there’s a lot you can learn about Hanukkah and a lot you can share.”

Many American Jews honor their heritage during the Christmas season by “doing mitzvot,” or performing good deeds. Volunteering at the local homeless shelter is a popular way many American Jews spend their Christmas days. Rabbi Lewis suggests another way of using Hanukkah to promote goodness in the world is by teaching your children a different social justice lesson on each night you light the candles on the menorah. Or donating money or items to a different charity each night.

Christian Americans, according to Rabbi Lewis, are also beginning to identify with Judaism, in a sense. “Christian churches are teaching to really embrace and welcome Jewish tradition, not necessarily into their own lives, but to be appreciative of it because they feel it connects them to their texts and their tradition,” he says. “So they like to witness and be a part of an experience. They feel that it connects them to their religion or to the origins of the roots of their religion.”

As for me, what once meant eight nights of presents as a kid became nothing more than a time in December that I usually remembered after the fact as a young adult and into my 30s. But since I’ve had kids, it’s become something more; a way to teach my boys to embrace their Jewish heritage, to forge their own identities, to teach them the importance of tolerance, perseverance and hope. Because that’s what Hanukkah is truly about. And right now, we need as much of that as we can get.

Today’s epiphany: Identify your star, it is your purpose