Since July, Scott has gifted almost $4.2 billion dollars to 384 educational institutions and charitable organizations in four months. While there were an assortment of tribal colleges and community colleges, half of schools are historically black colleges and universities.

“Thanks to her investment in VSU, a generation of students who are living through the challenges of a pandemic, a social justice movement, and reduced scholarship funding will have additional resources as they continue to pursue their dreams of a world class education at Virginia State University,” says Virginia State University president, Dr. Makola M. Abdullah who has been at the helm of the university since 2016.

VSU received $30 million from Scott, which came just in time for an HBCU that began to perk through its fiscal challenges, but was crushed in the global pandemic.

Virginia State University already was attempting to manage the decreasing funding from the state before Covid-19 shut down most of its campus. Afterwards, reports showed that they lost $26 million, or a 10 percent drop in enrollment.

VSU is one of many underfunded and in many ways, heavily ignored institutions carrying a rich legacy, but fought to remain open.

“We are about to launch a five-year strategic planning effort and, with this investment from Ms. Scott, we will be able to unfold the next phase of our mission in ways we simply could not have considered before,” said Tuskegee University President Lily D. McNair about the unrestricted donation. 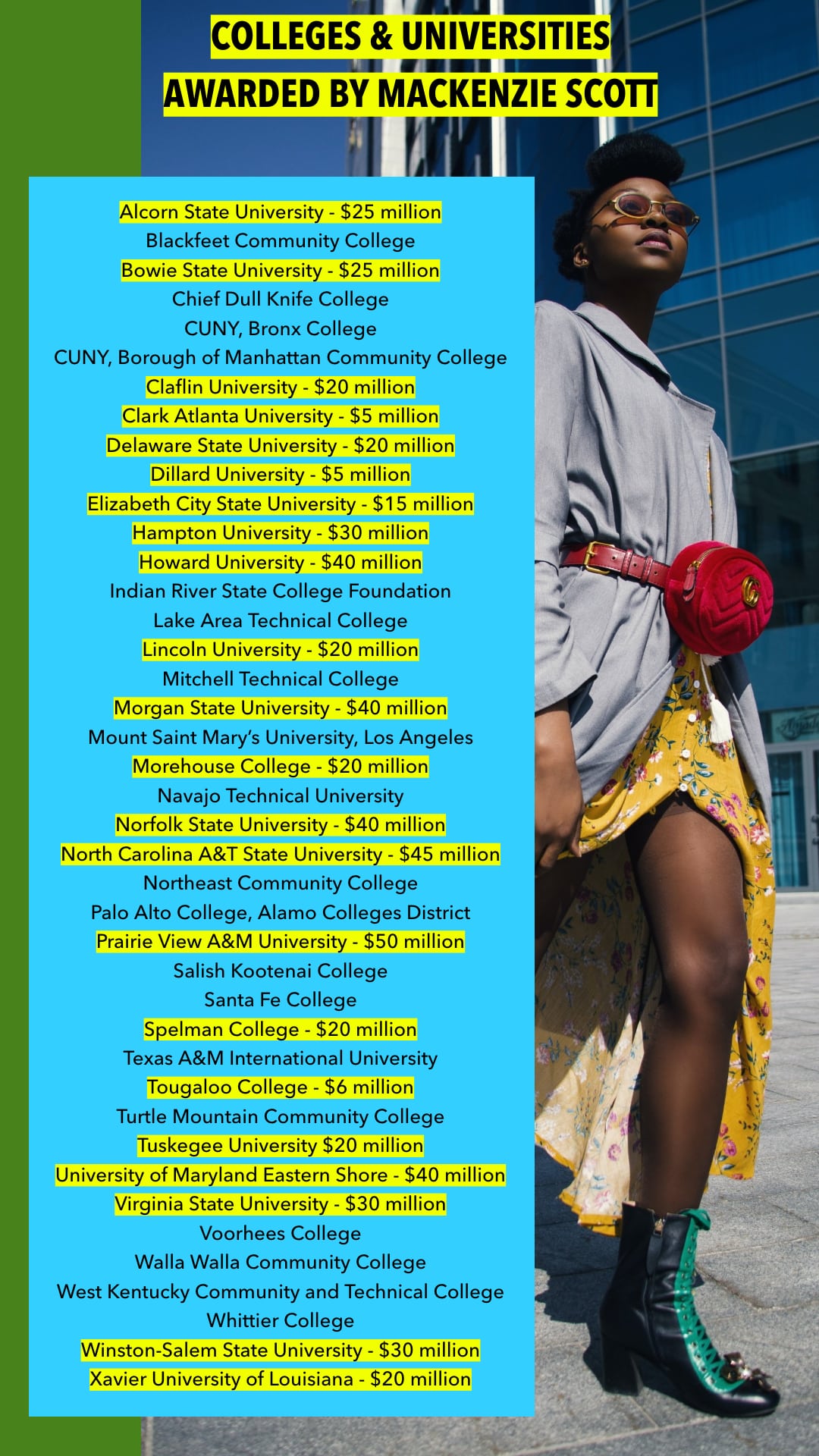 Tuskegee University, a 139-year-old institution with a rich legacy of vocational and philosophical studies had been struggling fiscally. For years, it had been subsisting off of loans, all the while, attempting to pay a $157 million loan off. As a result, there were issues in hiring new faculty and developing programs in 2016.

Added to Tuskegee’s fiscal troubles were its issues in jeopardizing re-accreditation due to money woes. It didn’t help that students who left the private college that played a critical role in training the heroic Tuskegee Airmen with loan debt higher than the average American.

“This gift comes at an opportune time for us,” added McNair.

| Read: Beychella and the state of HBCUs

Not only are university administrators happy, but the current and increased interest of potential students. During the nationwide protests against racial violence and injustice after the death of Minneapolist motorist George Floyd, HBCUs across the board saw an increase in enrollment. This included star athletes and student-scholars.

“Floyd’s death sparked a national outcry that we believe to be the second wave of the Black Lives Matter Movement, which formally began in 2013,” wrote Janelle Williams and Kellie Dixon, both university administrators. Calling it “The Floyd Effect” the reaction is described as “the public display of allyship to Black Lives, anti-racism, and the disruption of systemic racism.”

But, with the gross history of discrimination in underfunding, the concern of some was how would schools manage, especially since they were taking hits financially due to shut downs.

“”People are taking a re-look looking at us in a different way and say you know what, if that’s the school that produces great human beings I want to invest in it,” said Phyllis Qualls, the vice president of institution advancement at American Baptist College.”

Williams and Dixon warn that HBCUs must be up for the challenge to grow. While there are reports that they in general fared well in student-compliance when dealing with Covid-19 during the fall semester, recovering in education has a long road to walk.

Asantewaa Gail Harris an O/G of food justice: Access to fresh food is a birthright according to the wisdom of the ‘Original Gardener’ | The Light Series