Black History Month has become an exploited cultural product rather than a commemoration and dialogue to be better about race. Linkedin’s red, black and green logo is just one example of how BHM has become a diversity failure.

It is February 19th, and I am exhausted. My emails have pinged at the last minute with requests to speak during Black History Month. In truth, Black professors and professionals have tiredly joked about the speaking gigs during this time of the year, for years.

But, since the explosion of George Floyd, we felt compelled to be a voice. But this year, those requests have been outrageous. And they’ve been outrageously disgusting. Like the well-respected, Black chef I know who was asked to teach students how to fry chicken. It is as if the corporate world discovered that Black people, Black history and profound, diverse Black cultures exist. Now, they must take it seriously.

Quietly, some of my colleagues are protesting by not doing anything this month, while others are resting from a 9-month-run of talking, explaining, protesting, negotiating, voting, advocating, re-posting—all in the name of advocating for Black people who still sit in the lowest strata of hierarchies in the US and abroad; and in particular, when it comes to careers, companies and labor markets.

Why? Because many have been talking about these issues in the world, and even at their places of work, but have been repeatedly ignored or dismissed. Until this moment, when people and places do not want to be perceived as racists or racist. Then here comes the BHM Calvary to save the rest of the year. While there are those who acquiesce and shake their head at the anemic BHM event, this has become such a tired game.

| Read: Educator diversity is low in NYU; a nationwide issue

Even, I’ve asked several colleagues to speak at an event not pertaining to Black history, but during February and they’ve all done a slow, side-eye roll. I understood. I moved them to March and April.

Admittedly, for many years, I didn’t celebrate Black History Month because it had become a co-opted event that companies and people put on a “to-do” list of satisfying diversity quotas. It even began to fill dirty to participate, because I’d encountered bosses and co-workers who were clearly racist, said and did racist things, but were all smiles and saying all the right things at the Black event. In sum, Blackness and diversity had merely become a performance. Something that one could do in one hour to erase past inequities then move on.

So, when I saw the red, black and green liberation colors for Linkedin’s logo this month, I had to properly respond to its offensiveness. 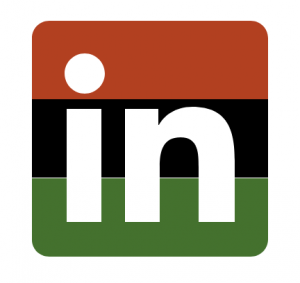 Red. Black. Green flags and logos. Do you know what that means? In general, the red means blood spilled by freedom fighters over multiple struggles in America and throughout the world. The color Black represents Black people, while green is for land taken and those stripped from their Native soil.

It also connects Black peoples with other nations fighting for independence globally. That is why it is also linked to Pan African consciousness. It is a symbol of not only unity, but seeking power.

It is a reminder that we are still in many ways, pushing towards a fullness and wholeness across the world when governments have denied our access to citizenship. Actually, it is a symbol still debated in the Black community.

So, I don’t know who at #Linkedin needs to hear this, but to use this flag for a Black History Month logo does not show solidarity. It is a diversity failure because it commoditizes a long, brutal history of pushing back against oppression.

Linkedin is one of many in a long line of companies, corporations and even schools that have used Black History Month as something to use to say “Hey look, we are inclusive in order to be on the right side of profit.” Unfortunately, there are those who look like me that usher in this sentiment. But in the end, we all lose. It really has been a costly game. Thus, I proffer that corporations and companies expand who they reference or look to when it comes to actualizing diversity. All historical and cultural products are not for sale. Talk to researchers, scholars, and activists embedded in movements for a full scope.