The Israel-Palestine region’s delicate peace disintegrates in recent clash over the long-standing issue of occupation.

For days, nations and leaders across the world have asked Israel to stop its bombing airstrikes on the Gaza Strip. In turn, Hamas’ military force has been asked to ceasefire with its less powerful, but also, deadly rockets. But, what began as a flare up during the recent holy period of Ramadan, is now almost a full-out war.

“The fighting risks dragging Israelis and Palestinians into a spiral of violence with devastating consequences for both communities and for the entire region,” said the United Nations Secretary-General António Guterres.

Even the US, one of Israel’s strongest supporters, both financially and politically, has stepped in. President Joe Biden requested a ceasefire between Israel and Gaza in a phone call to Israeli Prime Minister, Benjamin Netanyahu and Palestinian President Mahmoud Abbas. In spite of multiple efforts to stop the Israel-Gaza combat, the conflict continues.

One of the responses from Israel was through icons on the state’s official Twitter page: hundreds of blue rockets. 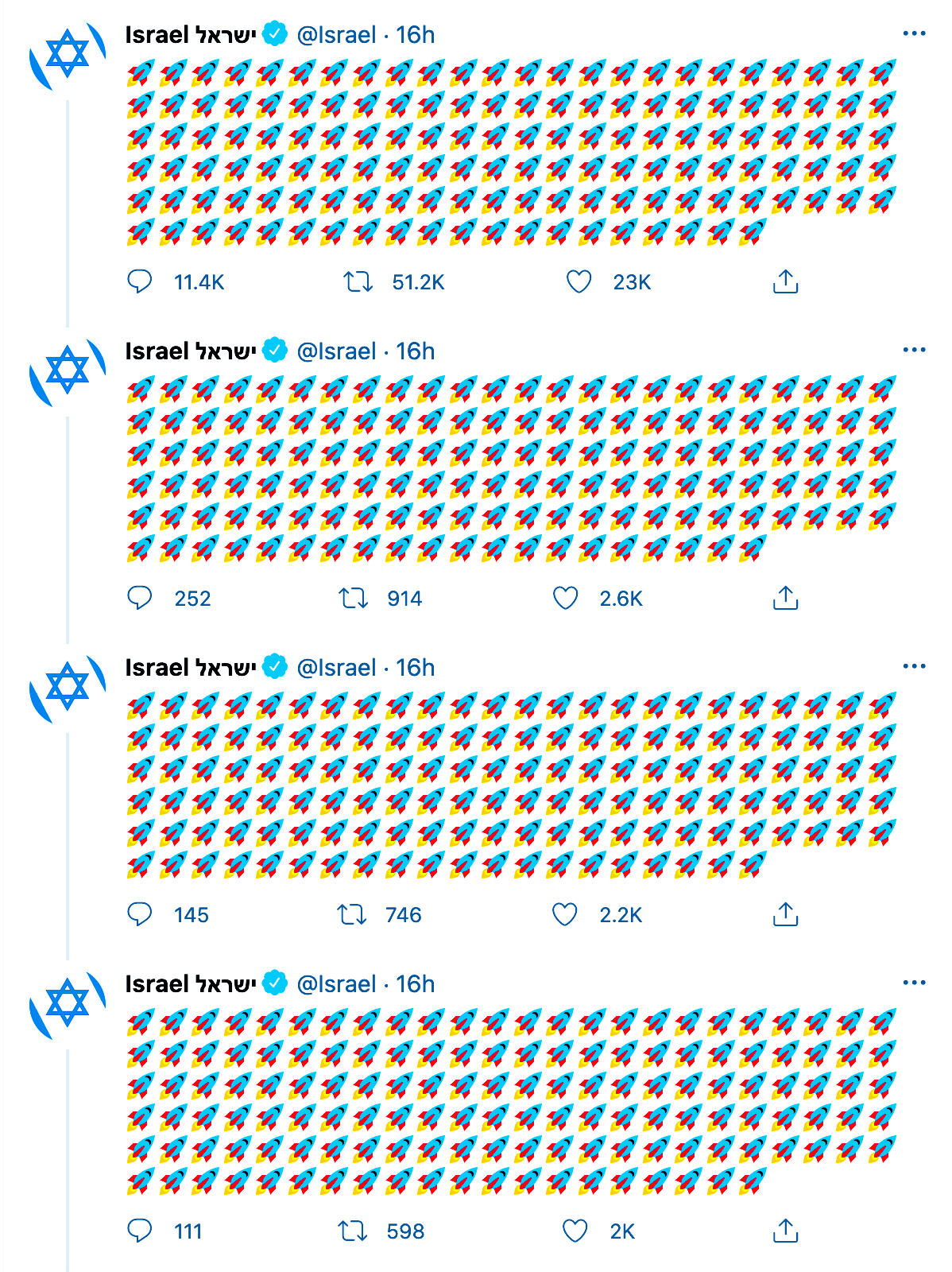 “Just to give you all some perspective, these are the total amount of rockets shot at Israeli civilians. Each one of these rockets is meant to kill,” they posted

Israel, who has one of the most highly-stocked military forces in the world, remain steadfast in what they call “self-defense” on “terrorists trying to plunge the region into violence.”

“Make no mistake. Every rocket has an address. What would you do if that address was yours?” Israel asked.

To answer their own question, they have continued airstrikes that started in the most recent clash with Hamas, a Palestinian Sunni-Islamic fundamentalist resistance group that is the de facto governing authority in the Gaza Strip.

“We will continue to operate as long as needed to restore quiet and security to all Israelis,” announced Israeli Prime Minister, Benjamin Netanyahu.

Going into its second week, Israeli military flatlined residential spaces and even destroyed the building that held the offices of Associated Press and Al Jazeera. To worsen matters, reports of diminishing food supplies, access to electricity and water amongst Palestinians has brought the region on the brink of a humanitarian crisis. Even hospitals are taxed. Doctors and nurses attempt to service  those injured and other patients while experiencing intermittent electrical outages.

During Ramadan, Palestinians reported that Jewish settlers were forcibly removing them from their home. For decades, the center of the Israeli-Palestinian wars is the violent struggle over land occupation and power. Since a Jewish state formed in Palestine in 1947, after World War II, Jews’ position is that the land belongs to them. Palestinians, who were already there said they’re being removed on what is their ancestral land too. However, the Jewish states is backed by Western countries, leaving Palestine vulnerable in the disputes.

One video-recorded incident went viral when a Jewish settler attempted to force a Palestinian family out of their home in the in Sheikh Jarrah, district of East Jerusalem. In the footage, the settler says that if he “doesn’t steal it, someone else will steal it.” An affluent residential enclave with ancient artifacts and holy sites for Jews, Muslims and Christians, Israel’s position says that the Palestinians are squatters whose leases have expired.

Settlers encroaching on Palestinian land has been a decades-long contention. After the recent efforts to remove Palestinians from Sheikh Jarrah, residents began  protesting the laws that favor Israeli rule, but Israeli law enforcement began harassing demonstrators. Shortly following, the skirmishes escalated to military action. On the last Friday of Ramadan, the most sacred time for Muslims, Israeli forces raided the Al-Aqsa Mosque in Jerusalem. Over 700 people worshiping inside were injured reported Al Jazeera.

“The current situation forces us to make difficult decisions in order to protect our holy sites and rights; Israel, the occupying Power, is committing war crimes and crimes against humanity against the Palestinian people and  targeting Palestinian presence in our holy Capital,” said President Abbas in an address.

Answering to Israeli’s bombardment of an air strike then their refusal to stop its occupation of the Al-Aqsa Mosque, Hamas issued a defense by firing a number of rockets at Israel. Since, neither side will back down. The unwavering of PM Netanyahu and President Abbas have resulting in an unnamed number of injuries, hundreds of deaths, and the upheaval of citizen life.

Almost seven months after the Taliban toppled the government, Afghanistan refugees and Americans evacuated the country.

U.S. on alert for more attacks with days left to evacuate American citizens and Afghan allies.

The Trump Administration remains largely silent about the failed coup in Venezuela last week. After days