Via his publishing company, Kaepernick Publishing, Colin Kaepernick announced the launch of, “Abolition for the People: The Movement for a Future without Police and Prisons,” which is slated to be released on October 12, 2021. An anthology of thinkers and activists spanning decades, the book calls for the elimination of the police and prison systems in the U.S in light of the rampant racial discrimination and systemic oppression.

The 30 essay tome that reimagines a world beyond policing and prisons, the collection represents a broad range of voices and experiences, including political prisoners, grassroots and formerly incarcerated community organizers, scholars, and family members of those killed by the anti-Black terrorism of policing and prisons.

Currently, excerpts of Abolition for the People runs on Medium as a series brought to you by a partnership between Kaepernick Publishing and LEVEL, a Medium publication for and about the lives of Black and Brown men. One of the essays, written by famed anti-prison activist and professor. Angela Y. Davis sets the tone in her opening:

| Watch: Prison abolition. What is it? Why is it necessary?

Movements against racist police violence and against entrenched racial injustices in this country’s jails and prisons can claim a history that is almost as old as the institutions themselves. Precisely because opposition and protests calling for reform have played such a central role in shaping structures of policing and punishment, the notion of reform has superseded other paths toward change. Ironically, many efforts to change these repressive structures — to reform them — have instead provided the glue that has guaranteed their continued presence and acceptance.

Founded in 2019, Kaepernick Publishing aims to “elevate a new generation of writers with diverse views and voices through the creation of powerful titles that can build a better and more just world.” Expressed in an Instagram post, “We believe reading is a liberator and aim to elevate the next generation of writers & creators, and hope to inspire generations by amplifying diverse views and voices.”

Most known for his political statements on the field for police reform and a stand against anti-black violence, positions that Davis so eloquently expresses, Kaepernick has remained focused on social justice even after his indefinite dis-invite as a professional football player. .

Back to the 50-yard line

Essentially blackballed for peacefully protesting racial inequality, police brutality, and systematic oppression in 2016, Kaepernick took a bold political stance amidst the disproportionate killings of Black people at the hands of law enforcement. Once he was displaced by NFL franchise owners and demonized by former President Donald Trump, the high-performance quarterback filed a lawsuit. He ended up signing an undisclosed settlement against the NFL in 2017.

Kaepernick played for San Francisco 49ers for six seasons, starting in 2010 after being selected as the second round draft pick of the San Francisco 49ers; helping the team secure their Super Bowl XLVII spot since their last appearance since 1994.

During the team’s third preseason game in 2016, Kapernick sat during the US national anthem in an act of peaceful protest against police brutality and racial inequality experienced by Black Americans in the country. Kaepernick followed his perceived defiance throughout the rest of the preseason as well as the regular season, kneeling while the anthem would play.

| Read: The pain, power and price of protest: Athletes and activism. Pt. 1

The protests were polarizing: some praised him and his stand against racism and others denouncing the protests, while others, mainly “patriots” and veterans labeled the demonstrations as treason against the country.

“No teams wanted to sign a player — even one as talented as Kaepernick — whom they saw as controversial, and, therefore, bad for business…no issue challenged the league and its owners more than Kaepernick and his silent protest during the National Anthem” wrote CNN political analyst and former vice president communications at the NFL, Joe Lockhart.

He continued, “The new season started with very productive dialogue and work proceeding between the players and the league. That all changed on a Friday night in Alabama at a rally for Republican Senate candidate Luther Strange, where President Donald Trump called for kneeling players to be fired.”

What Lockhart is referencing is a September 2017 campaign rally in Huntsville, AL, where the 45th President inquired of his supporters, “Wouldn’t you love to see one of these NFL owners, when someone disrespects our flag to say, ‘get that son of a bitch off the field right now. Out. He’s fired. He’s fired.”

Consequently, the San Francisco 49ers informed Kaepernick of their intention to release him. He opted out of his contract in March 2017, and was arguably blackballed by the NFL, leading him to continue his football career as a free agent after the season; he has remained unsigned since the 2016 season.

In November 2017, he filed a grievance against the NFL, accusing them of colluding to keep him out of the league. In February 2019, Kaepernick withdrew the grievance after reaching a confidential settlement with the League. Soon after, Kaepernick initiated his publishing company with a book calling to defund the police and prisons.

In the summer of 2020, conversations surrounding Kaepernick’s demonstrations resurfaced as national protests ignited following the police killings and shootings of George Floyd in Minnesota; Breonna Taylor in Kentucky; Ahmaud Arbery in Georgia; as well, the shootings of Jacob Blake in Wisconsin—all at the hands of the police using excessive force. Kaepernick’s intentions and hence, cause, were highlighted and championed. Prompting many to beg the question: Was he right after all? All the while, the NFL was criticized.

According to NFL commissioner Roger Goodell, “We, the National Football League, admit we were wrong for not listening to NFL players earlier and encourage all to speak out and peacefully protest…[w]e, the National Football League, believe black lives matter.” Later lamenting that the league had “moved on,” in a seeming attempt to avoid persistent questions of Kapernick not playing.

Tearing into the league and some players apologizing for their ignorance regarding the socio-political awareness, the President doubled down on his ire. 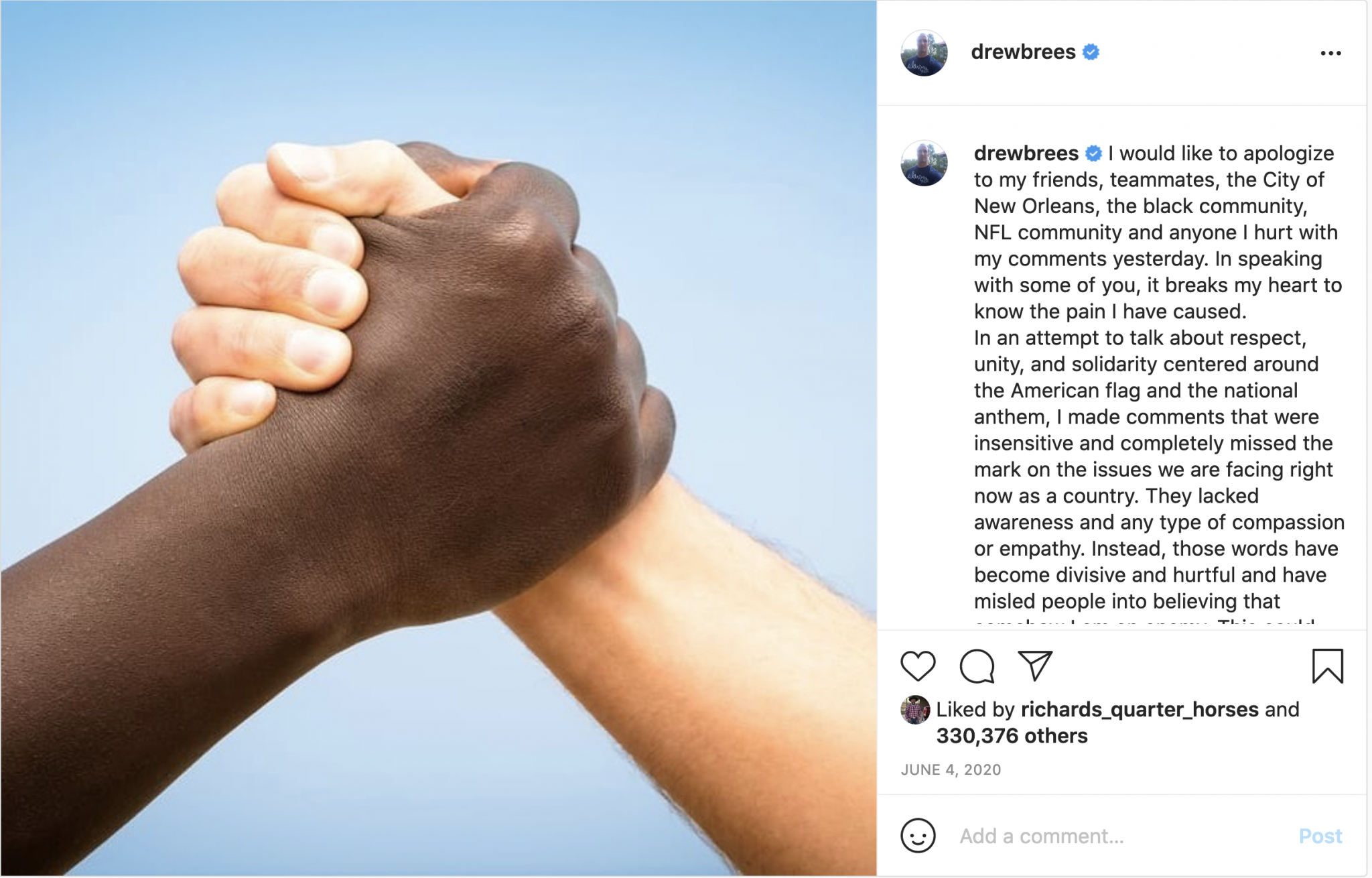 In a tweet captured by the Guardian from his now-defunct Twitter account, the 45th president asked, “Could it be even remotely possible that in Roger Goodell’s rather interesting statement of peace and reconciliation, he was intimating that it would now be O.K. for the players to KNEEL, or not to stand, for the National Anthem, thereby disrespecting our Country & our Flag?

“Abolition for the People” drew some ire on social media in response to their representation of a dark-skinned Black woman on the cover of the book. They argue that the masculinization of Black women has made them the face of grassroots protests and reform. A representation that many now think should be represented by others, namely Black men. Others are down with the cause, citing the defunding of the police movement and messaging as right on time.

“This anthology builds on decades of organizing and writing against policing & prisons…& features the work of over 30 contributors plus a reader’s guide, infographics, & cover art by Emory Douglas. I’m proud to have edited this collection & hope it adds to the chorus of voices calling for a world without & beyond policing & prisons. #AbolitionForThePeople.” 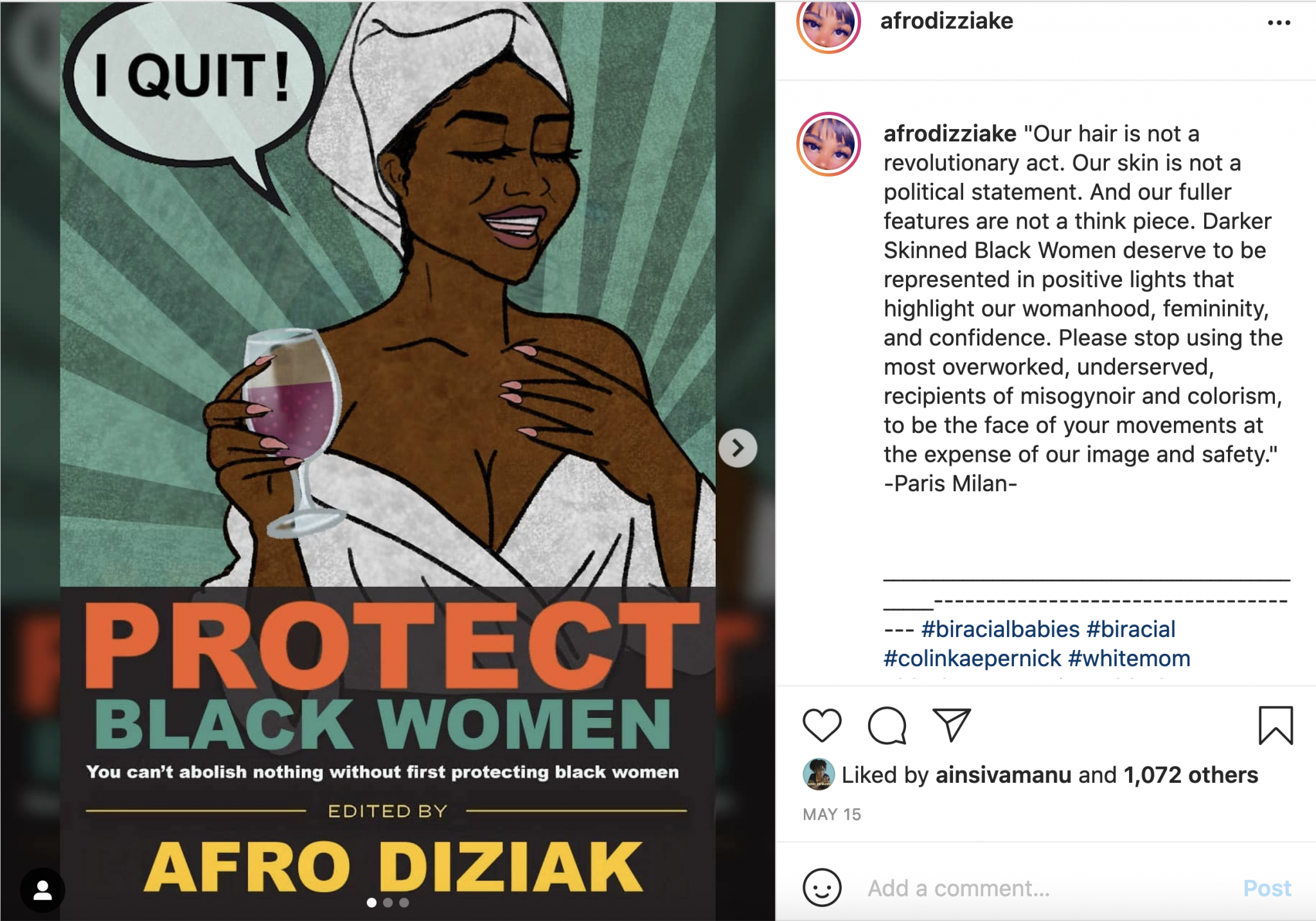 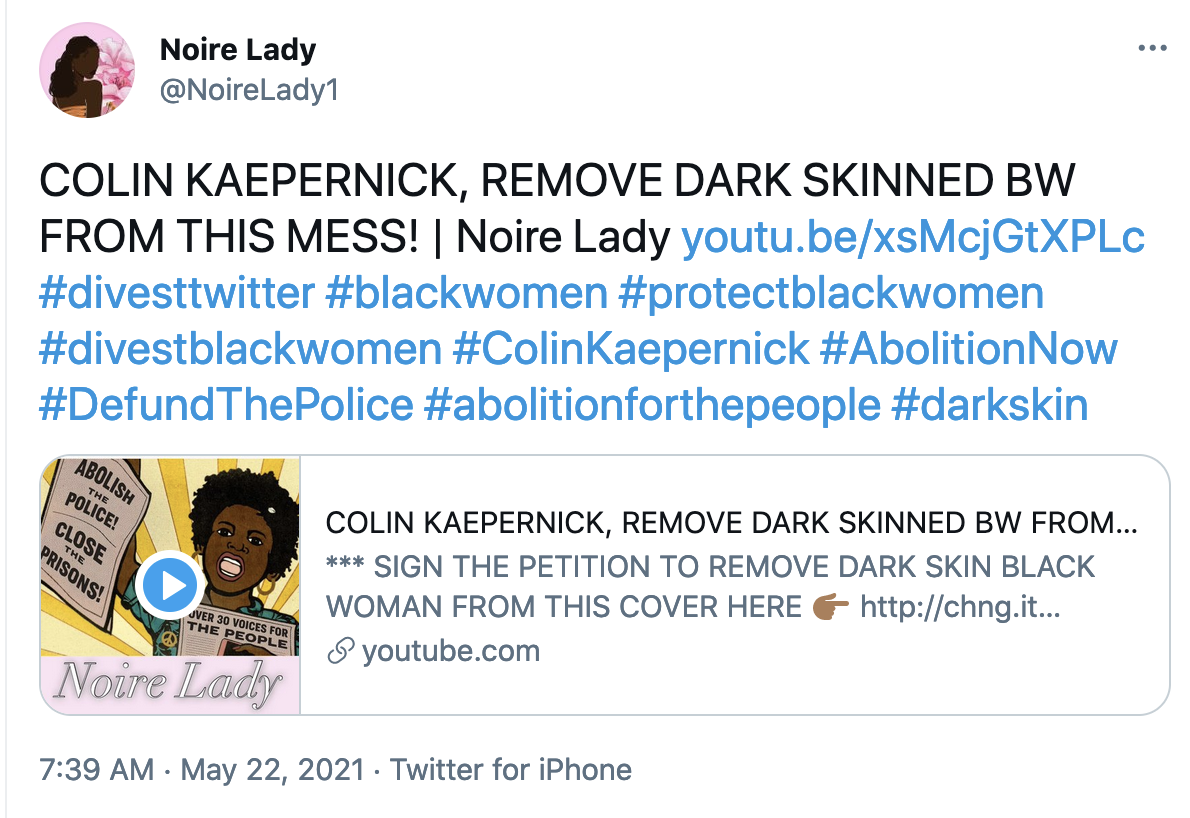 For now, Kaepernick Publishing hopes to build a narrative centering around increased community knowledge, organization, and engagement in attempts to rid them of predatory policing practices.

“We’re honored to build on decades of organizing and writing against policing and prisons and hope that this book will serve as an introduction to abolitionist concepts, histories, and practices. Readers won’t find all the answers here, but we believe they will find useful and provocative questions – questions that can open up radical possibilities for a future where our communities can thrive.” 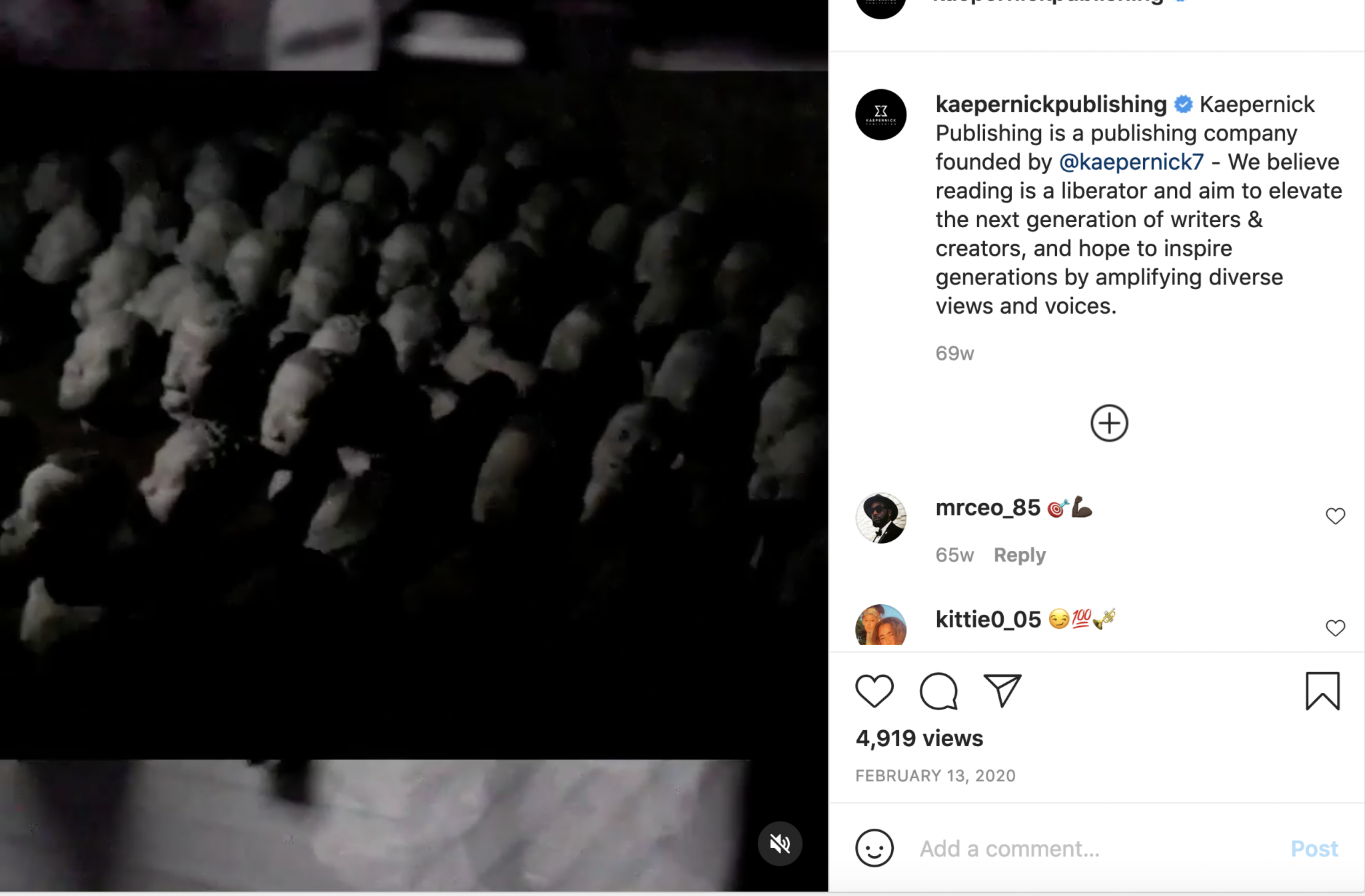 Systemic racism in the NFL