Recently, the Republic of China’s government announced the expansion of their two-child maximum policy, extending it to three children for married couples. This action has been speculated to aid their global impact and desired goal of becoming the dominant Superpower by mid-century.

Addressing the Politburo of the Central Committee of the Communist Party of China, General Secretary and Chairman of the Central Military Commission Xi Jinping approved an increase to the previous two child limit as to “[implement] the policy and its relevant supporting measures [to] help improve China’s population structure, actively respond to the aging population, and preserve the country’s human resource advantages…’” as reported by the state-run and controlled news agency, Xinhua News. The country is also hoping that these efforts will help boost declining fertility rates by “building a birth-friendly society.” 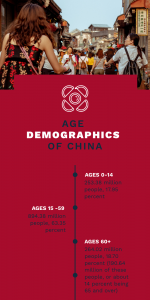 A major communist regime and an emerging tour-de-force on the world’s global market, China strives to maintain the popular Communist facet: strength in numbers. Yet with numbers beginning to silently dwindle, changes in policy including a supposed five year plan to lift reproductive restrictions in attempts to galvanize their population, are being made.

At present, only married couples can conceive and raise children in China. Meaning that single people, same-sex households, and the like cannot legally do so. Coupled with the child-bearing restrictions of the past, the country may have contributed to their own decline. It hopes to reverse these side effects via trade, technology, emigration, and population growth.

Since the communist regime has historically been notoriously private in regards to the its internal affairs, the new push towards transparency, international inclusion and incorporation is questionable.

According to the Chinese census, there are approximately 1.4 billion people in China, with about 51 percent being males and 48.76 percent being females. Leaving a surplus difference of about 35 million males. In the overage of unwed men, millions of them  opt  for the “shengnan,” or “leftover men” title, despite decreased birth rates, stagnant fertility rates, and an overall aging population.

According to the Council on Foreign Affairs, “ the most massive falloff in young manpower is set to take place in China.” The agency predicts that over the next two-decades, those who fall into China’s working-age will be about 30 percent of the aging population; though, this is set to happen in all the developed Western economies.

China’s aging population exacerbates the gender-gap left behind by severely restrictive family planning policies. In turn, it threatens a sustainable, balanced development. Although older workers do bring some particular skills and experience to their respective industries, they also tend to be less educated and less healthy than younger workers, as reported by the Council on Foreign Affairs.

If this unmitigated maturation continues, older workers will be forced to participate in the labor force although they already do so in lower percentages (especially in affluent places). Hence, the aging population may also cause an adverse reaction for the Chinese workforce en-masse.

The struggle to stay relevant | The Man Project

The struggle to stay relevant | The Man Project

While Lebanese officials dig through the rubble in the aftermath of a massive explosion in Beirut,

Yemen faces a severe humanitarian crisis. Amid ongoing conflict and the coronavirus outbreak, 24 million of

At the end of the road: Escaping protests in Hong Kong and living in a Covid-19 New York | Think Piece

Living through protests in Hong Kong then experiencing another hot spot, New York during the Covid-19