A popular Louisiana term, “God willing and the creek don’t rise,” came true to life with the recent natural crisis. In the state, winds reached up to 172 mph at the height of Hurricane Ida, making the Category 4 storm one of the strongest recorded in the U.S. Yet and still, most parishes are relieved that the levees held firm.

The massive crawl of gusting winds and rain made landfall 16 years to the day of Hurricane Katrina, the storm that put much of New Orleans underwater after several levees were breached. Most of the flooding concerns reported occurred in some suburbs. Residents of LaPlace, just west of New Orleans did not fare well. During Katrina, the district was not affected, but for Hurricane Ida’s passing, floodwaters overtook areas leaving some residents to be rescued.

Jefferson Parish president, Cynthia Lee Sheng reported that in the town of Jean Lafitte, a rural area about 13 miles south of New Orleans, a smaller levee that is not part of the state’s hurricane protection system did crack. When waters rose quickly, people became trapped in their attics. Rescue boats made their way to them and others who were not protected by the levee system.

In Grand Isle, Louisiana, one of the outermost towns and one of the first to take on Hurricane Ida’s fury, was also one of the hardest hit areas. Reports of stretches of land, including the only road to the island, are underwater with buildings torn to shreds. Recovery teams are clearing up the debris.

While Gov. Edwards praised Lafourche, they reported a different story. “Lafourche Parish roads are currently unpassable and will be for some time. Local officials are asking all residents to wait for the all-clear before returning,” announced an emergency message from the parish that also warned of a two-week delay for residents to return. Lafourche and Terrebonne report severe damage.

Structural damage across the region has been common in residents’ communication to authorities. A bird’s eye view shows compromised roofs dotting the landscape, and some caved-in structures that took on too much water and wind.

A part of the roof of the Lady of the Sea General Hospital in southern Lafourche Parish was peeled off by winds, forcing them to move patients to the lower levels of the building. “All patients and staff are fine at this time without injury; although, our hospital has sustained significant damage,” relayed hospital CEO Karen Collins in a message on Facebook.

While Sea General plans to evacuate a number of patients once it is safe, the concerted concern for hospitals across the region is the fourth wave of COVID-19. With already a high patient load, Louisiana’s healthcare system—both public and private—is juggling a natural emergency along with an ongoing health crisis. Right now, the average daily COVID deaths in the state are 62.

Another urgent issue is power. Thousands of miles of power lines are out of service and 911 dispatch centers inoperable. As well, cell phone services are down. Utility companies have told residents that restoration of power could take weeks to remedy. In the meantime, many parishes have issued boil water advisories because of outages.

So far, two deaths have been documented. One is a person who was injured from a fallen tree at a residence off of Highway 621 in Prairieville, a suburb of Baton Rouge was pronounced dead. The other is a man who drowned in their car during flooding in New Orleans near Interstate 10 Sunday night. Authorities say they expect more deaths will be reported during recovery.

Now, parishes in southeast Louisiana are in rescue and in recovery from the slow-moving hurricane that made its way across the region this past Sunday and early Monday.

Deanne Criswell, administrator of the Federal Emergency Management Agency, said at “least 22 different agencies are helping coordinate assistance to Louisiana, from the Department of Defense to the American Red Cross.”

Local officials and emergency agencies have all asked the over 580,000 residents who evacuated to wait until things are in better order. This also includes local universities that are closed for at least a week. Gov. Edwards urged in the following message via Twitter:

“I know people are anxious to get back home, but I am urging you to wait until you get the all clear from your local officials. The storm may have passed but dangers still remain. #lagov #HurricaneIda #Ida”

The response from constituents has been ultimate clap backs. 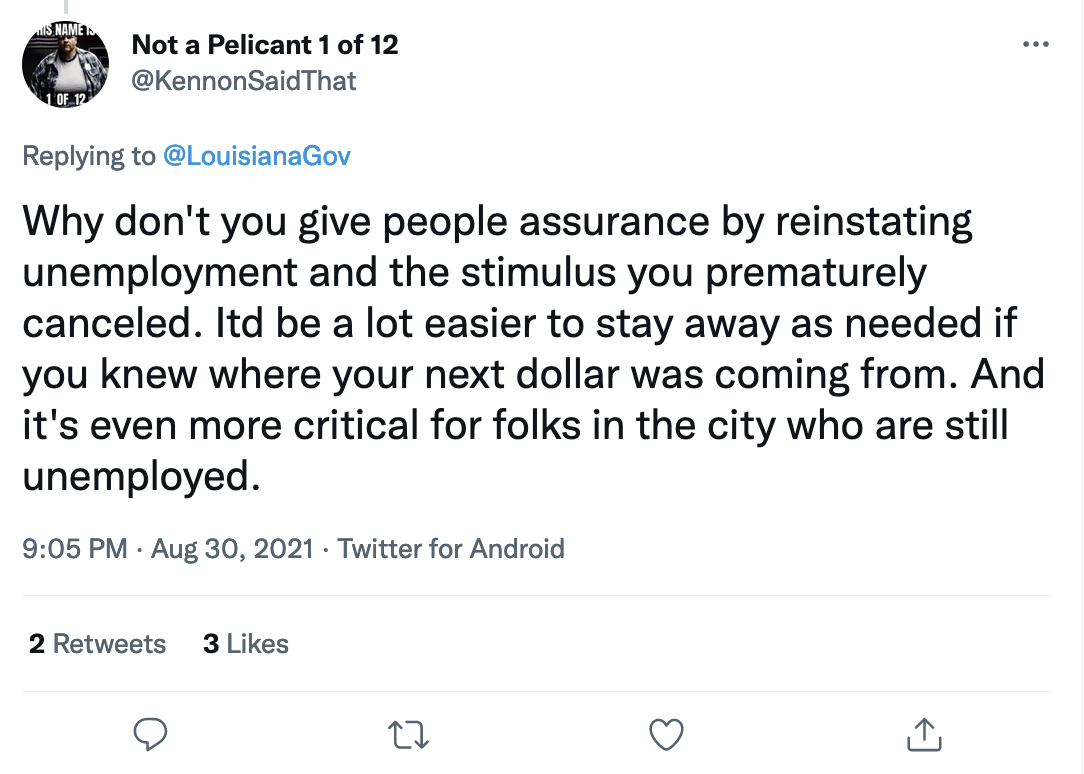 Louisiana, a Republican-majority state, ended unemployment benefits with other Red states in May to force people to return to the workforce. However, job growth in the state is sluggish. With power and internet outages, the economy and labor will grind to almost a halt in the southern part of the state.

Although Louisiana has felt the brunt of the storm, Ida is still thrashing Mississippi. There, a curfew is in effect as the state has also reported power failure.

Louisiana authorities have yet to release the total in damages, and the time to fully recover.