The City of Newark continues its commitment in its artist-inclusive creations in redeveloping the cityscape.

Driving into Newark, New Jersey on Route 21, the brick walls serving as foundation to the above train tracks declare to all who enter, “you are now planted on artists’ soil.” Perhaps, the Bricks in the northern New Jersey metropolis never were painted in gold. But, they are marked by those whose imaginations have maintained the heartbeat of a city, often left under-resourced and overlooked.

A mural here, a wall painting there, a sculpture carved into iron in a place or two. Much like the altars to the Catholic Church’s holy matriarch, the Virgin Mary, embedded into Renaissance-era buildings in Italy, artworks throughout the city are shrines marking territories; at the same time, providing shelter. Or of recent public art, the exhibitions establish who settled long before waves of migrants slowly crept into a location left for dead after the 1967 insurrection.

If anything, art saved Newark. Not the educational system. Not the churches, of which the name Newark comes from the biblical story of Noah’s Ark. Definitely not the politicians. Certainly not the labor industries—for there was not much to show when deindustrialization led to the shuttering of factories. However, when mass manufacturing did make a hard, quick exit, as a gift, it left years of pollution in main waterways.

For decades, Newark was simply a pass-through to New York, or a ride-by from Manhattan to the suburbs. Yet and still, those who walk the city’s pavement—which is the site where American film production and the once popular cycling competitions began—know its power.

While small businesses dot the landscape, galleries and exhibition spaces are the most frequent pop-ups in Newark. Thus, the grit and grime of the urban terrain become the ink to map out city canvases holding even street artists as shamans, or with some level of high regard. So much so, an artist became mayor.

Newark’s Mayor Ras Baraka is a poet who springs from prose parents, Amiri and Amina Baraka. Amiri, the creator and purveyor of the Black Arts Movement fused his writing with the advocacy of Black power. Mayor Baraka, like his lineage, epitomizes a common theme in the Bricks—an artist working the dual role as an activist. In turn, resisting in two ways: to build and destroy.

His voice is forever heard in intermezzo skits as the teacher schooling students about life and love, throughout the multi-grammy winning album, “The Miseducation of Lauryn Hill,” created by Newark emcee-actor Lauren Hill. Hill’s record-breaking project, where she also worked with a number of local creatives, remains as one of the most critically-acclaimed hip hop creations today.

With art imitating life, Mayor Baraka was a high-school teacher for many years. Eventually, he became a principal, all the while, continuing to perform as a poet and participate in both electoral politics and activism. For years, Mayor Baraka’s pro-black activist family, and kinfolk connected to the street organization, the Zoo Crew, positioned his constant political agitation and flirting with electoral politics as one situated at the margins. Gradually, he garnered such a stronghold in the South Ward, that the special mayor’s election in 2013 when Cory Booker, now a New Jersey senator, stepped down, proved to be critical in a low-voting city.

On occasion, Mayor Baraka, who is a published literary artist, drops poetic singles backed by hip hop beats with an accompanied video. Effortlessly using his oration skills in public speeches, it is interesting to see how the son of a revolutionary attempts to sway in-and-out of his father’s teachings while navigating the Democratic establishment that both reviles and respects the Black power rhetoric he imbibed from an infant on. Nonetheless, hands down, and indisputable, Mayor Baraka finds ways to honor the art.

Today, Mayor Baraka backs a number of public artwork commissions in Newark. Most recently, the city announced the completion of a new mural titled, “The Future Nurtures the Past,” by local brothers, Andre León and Robert Ramone who make up the artist duo, Rorshach. This double-sided, nearly half-mile long mural stretches along Raymond Boulevard from University Avenue to Lock Street in the Central Ward. 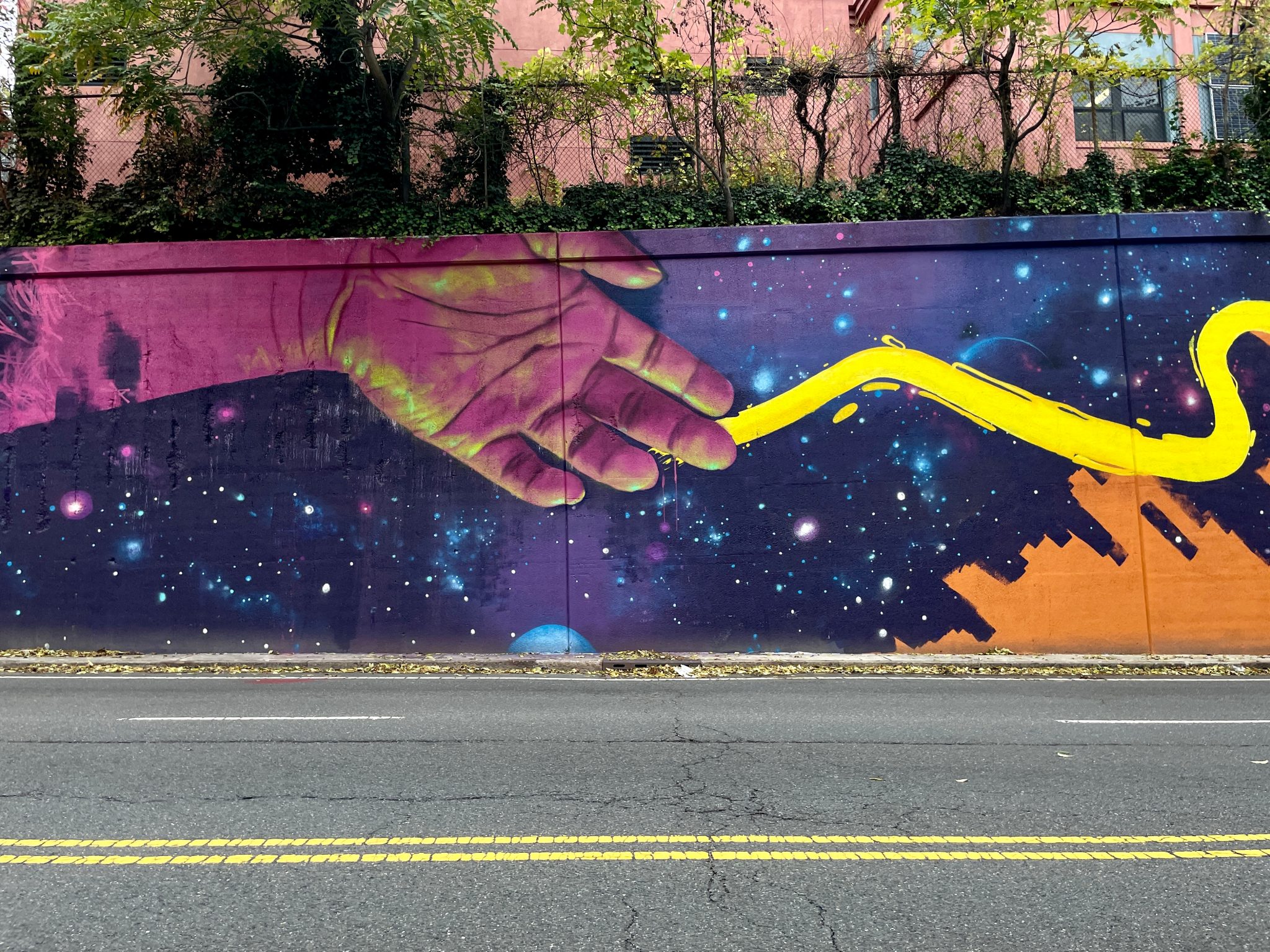 Explained in a release:

The mural acts as a vibrant portal for those in transit. Each side shares a rush of color, colliding gradients, and forms, hinged by monumental-sized human hands. The hands are those of unrecognized women leaders from Newark that have shown the artists and others continuous care. They are built in honor of a single mother, a survivor, a student, and others that lead with perseverance. They are hands of strength that despite challenge, nurture and uplift. The artists hope that those driving by will feel the embrace that they have.

To date, the project which took two months to complete, is the artist’s largest artwork to date. The mural was produced with the support of the City of Newark’s Division of Arts and Culture.

“The public murals seen around the city tell our stories, inspire, and empower our community, while simultaneously providing artists with a space to express their creativity and define the excellence of our city,” said Mayor Baraka.

He adds. “This particular mural will beautify Raymond Boulevard, a major and historic artery in our downtown. This is a piece of outstanding work by two of our native artists and I am looking forward to seeing more such murals across Newark.”

Re-imagining the jurisdiction through art has been a consistent initiative with Baraka. In 2020, the city announced an effigy of famed Black abolitionist and Civil War hero Harriet Tubman would be erected to replace the Christopher Columbus statue in Washington Square Park. He also stated  Washington Square Park would be renamed after Tubman. Currently, the park honors the nation’s first president and slave owner, George Washington.

A cluttered, back alley in Newark’s historic Lincoln Park livens up with artist inspiration.