Can the U.S. afford another natural disaster or financial blow during a pandemic? Yet again, nature places her bets on the American south and Midwest.

On Friday, a series of tornadoes struck eight states – Arkansas, Illinois, Indiana, Kentucky, Missouri, Mississippi, Ohio and Tennessee – across the Midwestern and South-central regions of the U.S. Although an investigation is on-going, there are an estimated 100 deaths coupled with millions in infrastructural damage.

Small and large businesses alike were leveled. For instance, six Illinois Amazon warehouse employees were killed, along with two deaths including one at a nursing home in Arkansas. Reportedly, there were four deaths in Tennessee and two more in Missouri. However, the brunt was felt in Mayfield, KY – a community of 10,000 where a candle factory, as well as, law enforcement agencies were decimated.

“[The tornado] didn’t take a roof, which is what we’ve seen in the past. It exploded the whole house. People, animals … just gone,” explained KY Governor Andy Beshear. “To the people of America, there is no lens big enough to show you the extent of the damage here in Graves County or in Kentucky,” he told CNN.

One tornado rampaged 227 miles of terrain, most of which being Kentucky. In the aftermath, approximately 80 residents were killed and about 50,000 were left without power or electricity. The 300 members of the National Guard have been dispatched, and the governor has asked the federal government to declare a state of emergency. 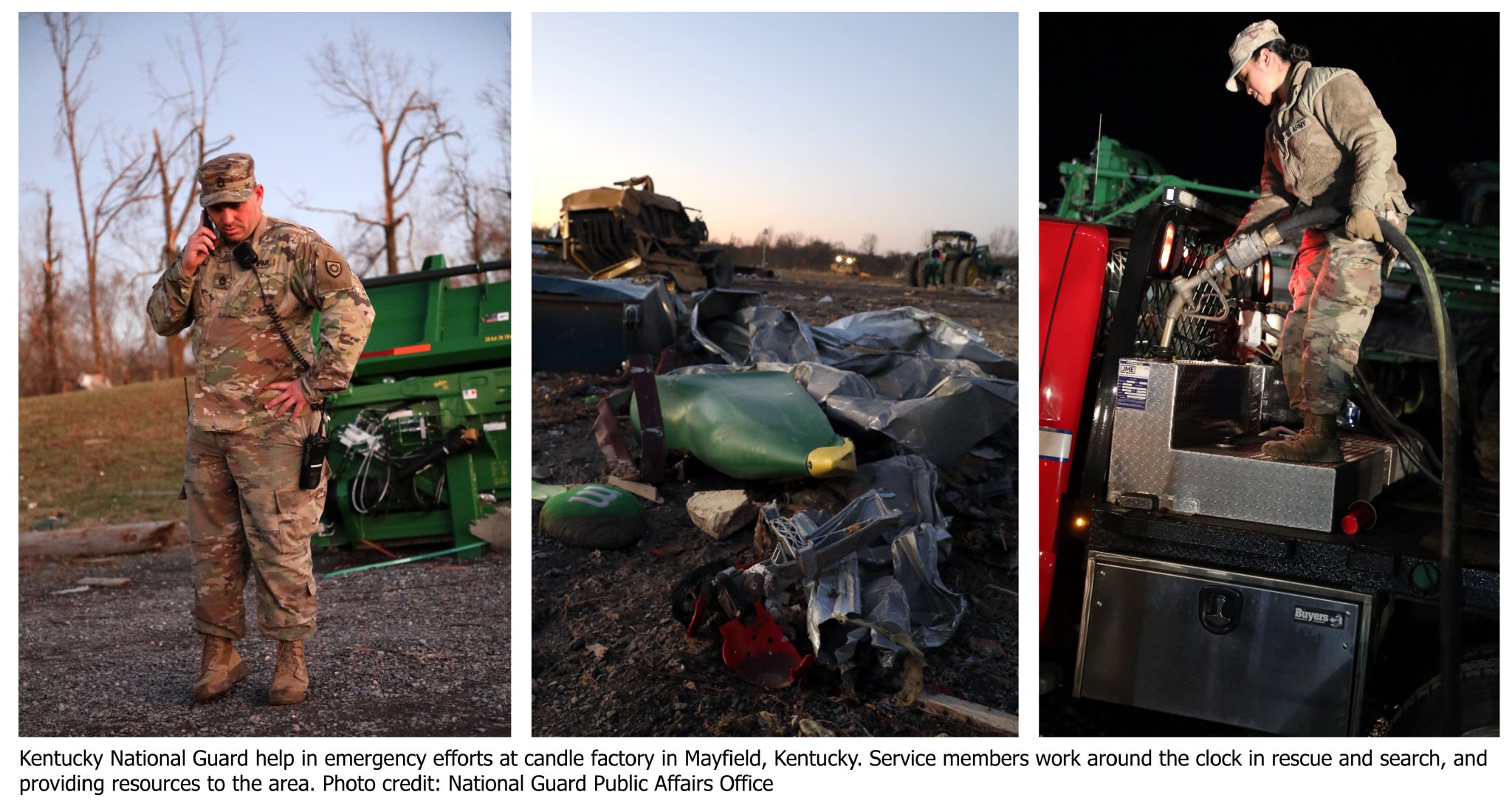 In support of those affected, President Joe Biden offered the Administration’s full support. “I want to emphasize what I told all the governors, the federal government will do everything, everything you can possibly do to help,” he expressed.

Biden’s commitment to assist in emergency efforts is a far cry for one of Kentucky’s foremost GOP members, Sen. Rand Paul (R-KY). In the past, the senator opposed using money that would “raise the national debt” for relief aid to states and U.S. territories hit by natural disasters. He suggested cutting money from other programs rather than taking it out of the national budget when major category storms hit, such as Hurricane Sandy (2012), Hurricane Maria (2017) and Hurricane Harvey (2017).

Moreover, Sen. Paul has been critical of the Biden Administration’s spending in efforts toward post-pandemic recovery. Just days before, he said “I can see when a storm is brewing,” after Congress waived the PAYGO law regulating spending with cuts. Now that Sen. Paul’s state bears the brunt of devastation; he released an appeal for the Biden Administration to “move expeditiously to approve the appropriate resources for our state.”

To complicate matters, tornadoes are notoriously difficult to predict and are unusual for the winter months. Like the litany of other uncharacteristic major natural disasters, the U.S and the world are being ravished more aggressively.

Although supposedly causing less fatalities, there has been a surge in severity and frequency of weather-related natural disasters over the past 50 years as a result of climate change. “That means more heatwaves, drought and forest fires such as those we have observed recently in Europe and North America, explains Petteri Taalas, the Secretary-General of the World Meteorological Organization.

He continues, “ We have more water vapor in the atmosphere, which is exacerbating extreme rainfall and deadly flooding. The warming of the oceans has affected the frequency and area of existence of the most intense tropical storms,” he comments…Economic losses are mounting as exposure increases.”

Sweltering St. Louis summers, droughts along with shrinking bodies of water are all extreme natural occurrences seen in the U.S. Great Plains and southwest. Moreover, global warming does not solely affect the summer, as the winter months in the area are experiencing noticeable changes in intensity.

Along with this winter’s anticipated snow-inducing drought season in California, the Midwest was rocked with uncharacteristically cold temperatures that led to power outages and natural gas supplies freezing last year. Often causing a greater burden on the most vulnerable populations.

“During the winter months, [residents] did not have heat for a whole month…My [neighbors] are in their late 70’s with no heat. Unlike other unsavory characters in the building, we pay our rent.” complained St. Louis resident and military veteran Shawn Washington.

Last year, the infrastructure in Texas, Arkansas, Oklahoma and Louisiana broke down when an usual cold front in February took out power for weeks in some areas. In several states, the hard freeze left millions without reliable power. Subsequently, thousands of homes suffered damage when water pipes burst due to water lines not set up for such frigid temperatures.

With winter not yet landing, the National Oceanic and Atmospheric Administration predicts a colder-than-normal season in some areas, while in others, a drought. Michael Farrar, Ph.D., director of the National Centers for Environmental Prediction, hopes the predictions help communities across the country prepare.

At a time of economic insecurity at best, and social morale is at an all time low amidst a pandemic. With that being the case, can the country afford yet another bill to boost the economy? Only time and temperatures will tell.