A media revolution and the most expansive, publicly accessible digital directory of Black agriculturalists launches a sustainable initiative that works to spread holiday cheer and Black owned products.

This year, Ark Republic and Black Farmers Index wanted to be more intentional in its mission to direct consumers to Black farmers. As a result, they came up with the idea to add a seasonal, curated food box to fundraising effort. The campaign encourages supporters to “donate and eat well.” Now, both organizations are selling an edible experience through their 11-item gift box.

“Vittles is cowboy slang for victuals, which is food or food provisions,” explains Shivers who started Black Farmers Index as a solutions-based journalism project through Ark Republic. The listing was a way to offer more exposure to Black farmers to address growing food insecurity during the pandemic. “My father calls food vittles when he’s about to cook for us. It is his way of showing love. On the other hand, my mother came up with the tagline, ‘sown with soul,’ because we approach our curation efforts as sacred work.”

After such a long year of uncertainties in food systems and even both companies maintaining their operations, they saw it fit that the most sustainable way to remain open, while maintaining their commitment to Black growers was by highlighting the high quality of produce and food items that are often specialty items. “I lot of Black farmers grow and harvest using organic, pesticide free and non-invasive methods,” says Shivers who explained that the market for chemical-free and bio-friendly food is massive, but Black farmers are often left out of the industry.

The focus of the inaugural box, which is their winter edition, is to tell the stories of the growers, while highlighting their food. Thus, it features Medjool dates from Sam Cobb Farms in Desert Springs, CA; Honey sticks from Westside Beeboyz in Chicago, IL; Organic strawberry jam from Browntown Farm in Warfield, VA; Dehydrated fruit from Bask Farm in Wilson, CA; Ethiopian-Tanzanian coffee blend from Sweet Unity Farms Coffee in Mbeya, Tanzania; Organic walnut butter from Corky’s Nut in Rumsey, CA; Honey jar from Akron Honey in Akron, OH; Cacao from Davis and Daughter Farms in Atlanta, GA; Organic peanuts from Rowe Organic Farms in Albany, GA; and spices from an artisan salt supplier, Earth & Field Salt Co. in South Carolina.

To sweeten the pot, Black Farmers Index along with its sister organization Ark Republic are small, Black woman-owned and run businesses. Both were started by Shivers, an NYU professor. The popularity of the index exploded after the 2020 George Floyd protest resulted in the initiative that turned into a non-profit spearheaded by Shivers and two of her sisters, Amara Brown and Ayanna Shivers.

“Black women entrepreneurs get less than one percent of funding or support, so our fundraising efforts aim to be sustainable, profitable, and tasty,” says Amara Brown, who heads community engagement for Ark Republic. “More importantly, we’re about feeding the people through information and giving them the best options on what they eat by supporting an important part of agriculture: Black farmers.”

Black and women owned businesses were disproportionately affected during the pandemic. Estimates say about 40 percent closed last year when businesses had to stop in-person operations during stay-at-home orders. This is not much of an improvement on pre-COVID numbers, with approximately 50 percent of businesses not expected to make it past the five year mark. With the decrease in revenue in an already fragile economic, Ark Republic and Black Farmers Index are more fervent to build again, while maintaining its lean in narrating the experiences of those who are often under-represented in the current digital landscape.

“Black businesses don’t have the relationships, the networks of support. They only [had] liquidity for about two weeks’ worth of bills at the onset of the pandemic. We also know the ongoing impact of systemic racism in the financial sector, in the business sector, and the racial wealth gap that they’re dealing with,” expressed NYC small business services commissioner Jonnel Doris.

Hence, Ark Republic typically holds two fundraisers per year to help with operating costs and project production. In the past, some have included featuring Black Farmers with live cooking class series, or a tea party and butter pound cake bake sales. With all the efforts, the modest dollars raised have been put to good use. With the increased funds, Black Farmers Index and Ark Republic have been able to expand. They were able to bring on a newsroom editor and work with five regular contributors.

Of equal celebration, the fruits of their diligence have been seen in this past year’s accolades. This past summer, the Ark was chosen as a recipient of two awards — the Comcast RISE award and Newark’s Creative Catalyst grant. As well, they received support from Invest Newark, the City of Newark’s Economic Development Corporation. 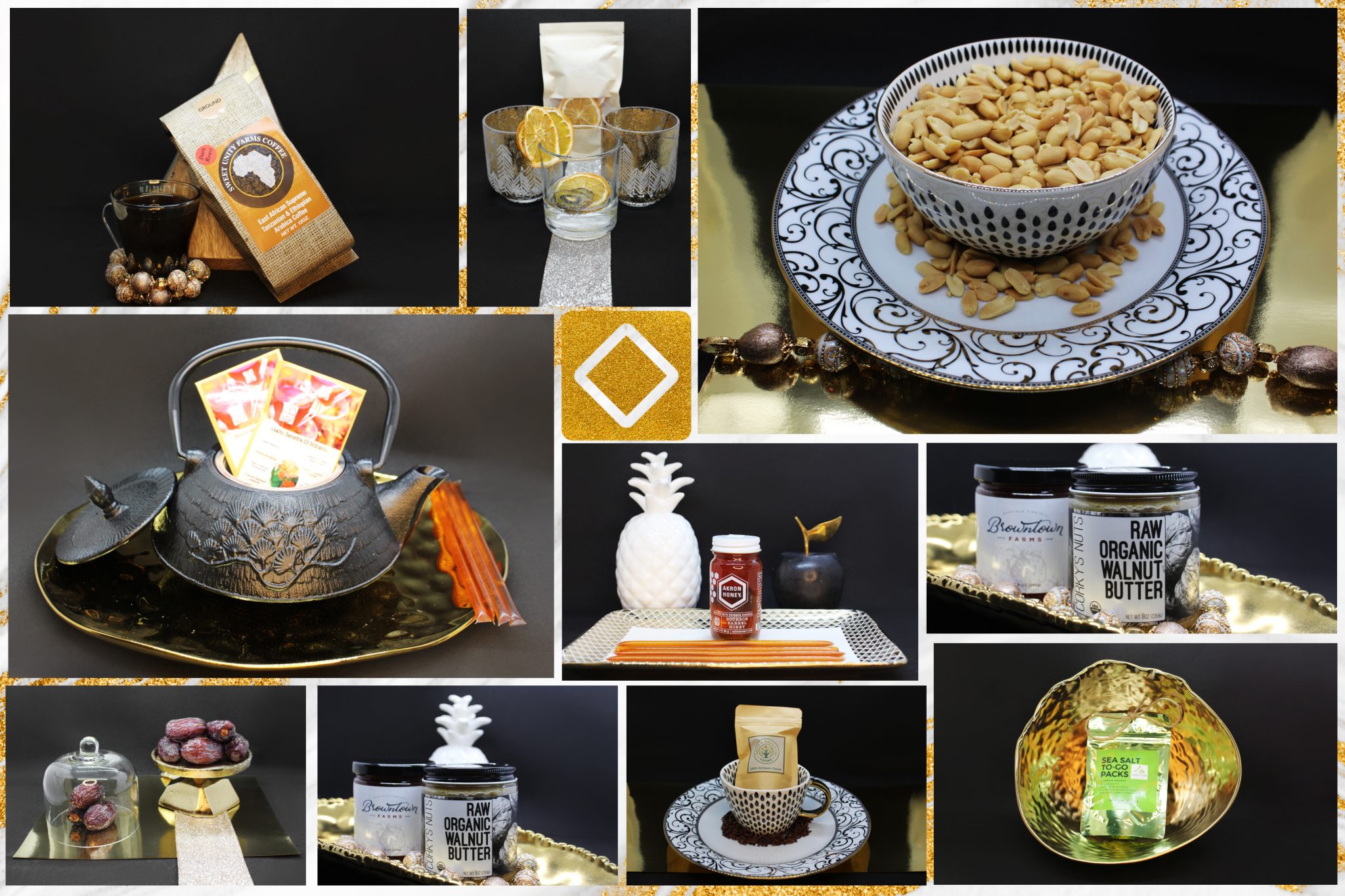 The jams come from Browntown Farms, a family farm purchased several generations by Herb Brown’s great-grand-father. Mr. Brown says that it was bought from the money his forebear made selling liquor during the Prohibition Era. Although the act resulted in jail time, the Brown family held onto their land. Today, they produce a range of fruit & vegetables.

The idea of making and selling jam comes from Herb who wanted to expand the use of their cherished strawberries. Using the recipe of Herb’s father, the jams have become a favorite at Black Farmers Index.

The coffee from the family-run, Sweet Unity Farms, has a deep legacy. The farm, owned by David Robinson, was purchased after Mr. Robinson moved to East Africa where he married a Tanzanian woman and started a family. While there, he began to harvest crops too through a business model of cooperative economics with other local agricultural workers.

Also, the Sweet Unity Farm shows Mr. Robinson’s strong activist, pan-African and Black power roots. For Mr. Robinson, the coffee bean does not fall far from the plant because his father is Jackie Robinson, the American professional baseball player who became the first African American to play in Major League Baseball.

The hibiscus tea by Dr. Dana Nettles, represents her belief to heal thyself with plants from the land. Dr. Nettles, who represents several generations of medical practitioners, is also married to a medical doctor. With several siblings and children who are medical doctors, this family of healers staunchly believe that in the power of plants that they started a business with herbs from their farmland in Alabama. For Dr. Nettles, medicine enhances beauty, both inside and out; hence her business, Dr. Nettles Beauty.

New to farming is Walter Davis III of Davis and Daughter Farm. A New Orleans native now living in Atlanta, Mr. Davis decided to make his agricultural ventures international. As a result, he partnered with a friend who married a woman from Belize whose family owns a cocoa farm. Through their partnership, you have the cacao discs to make decadent hot chocolate. Mr. Davis’ daughter suggests that you mix two cacao discs with condensed milk or condensed coconut milk for a thick, yummy hot chocolate.

To sweeten the pot, we added two apiaries for your honey selections: Westside Beeboyz and Akron Honey. Westside Beeboyz, led by beekeeper Thad Smith, is one of the few Black-owned apiaries in Chicago. For years, Mr. Smith and his team have used beekeeping as a way to educate youth and provide alternative careers.

For Wesley Apiary and Family Farm, its main beekeeper, Wesley is lovingly known as the “honey man” in his hometown Akron, Ohio. Wesley along with his wife and children harvest honey and hold various events around their pure, raw honey and the various ways they flavor it; such as their honey kept in bourbon barrels for an extra kick.

Going to the west coast of the country, we added three growers who add flavor and unique harvests. Forget California love, you have walnut love with Corky’s Nuts. A farm co-owned by Nicole Facciuto and Eric Hargrove, Nicole comes from several generations of farmers, but often took the profession for granted until she had one bad encounter with a rancid walnut. So, she decided to leave her career in New York for the nut groves of California. She founded Corky’s Nuts with her husband, Eric Hargove. There, they produce high-quality, organic walnuts and several walnut products like the one-ingredient walnut butter in the pack.

Farmer Chanel of Bask Farm grows edible flowers and is a hemp expert. Because her flowers are popular for cakes, pies, cocktails and toppings for salads, she added a range of dehydrated fruits to her list. While she works with local farmers for the fruit, she is in partnership with local growers who produce premium harvests.

For Mr. Sam Cobb of Sam Cobb Farms, it took him 21 years for his date orchards in Desert Springs to grow to maturity for harvest. The good thing is, his patience led him to be the only Black farmer growing dates in the country. Now, he is highly sought after with his delicious Medjool Dates, and part of an even longer legacy. Growing Medjool Dates, goes back 6,000 years to regions in the Middle East and North Africa. So, when you taste Mr. Cobb’s dates, you’re biting into antiquity.

What is a food box featuring Black farmers without peanuts? Sedrick Rowe of Rowe Organic Farms, comes from a line of farmers who tilled Georgia’s land for generations. A millennial farmer, he is one of only three certified organic peanut farmers in Georgia. Plus, in 2020, he became the first organic hemp farmer licensed in South Georgia. Mr. Rowe takes pride in his commodity and is an active farmer in the agricultural community as a USDA soil conservationist.

Last, but not least is Barbara of Earth & Field Salt Company. Barbara, who has committed to sourcing Black farmers for her excellent line of artisan salt blends, provides the spices. She started the company when her son developed a range of food allergies. The New York native who moved to South Carolina switched the family’s food regimen which included healthier, naturally-made seasonings without chemicals and other toxicities such as metal.

Vittles: Sown with Soul is the tastiest write-off you’ll eat all year featuring Black growers across the U.S.

Vittles: Sown with Soul is the tastiest write-off you’ll eat all year featuring Black growers across the U.S.

This week we launched a non-partisan platform exploring the political landscape called, “Back to the Brick.”

Ark Republic chosen as a recipient of Comcast’s RISE award

The broadcasting conglomerate awarded $5 million to small businesses in a grand commitment to support 13,000

Join us in our second installment of the “Black Farmer and a Chef,” a live, interactive