White supremacist teen, Payton Gendron traveled 200 miles from his Conklin, N.Y. home to Buffalo with an AR-15 assault-style rifle and illegal magazines carrying more than 10 rounds of ammunition. He drove to the Blackest zip code in the city then stopped at the only district grocery store. While live-streaming on Twitch, he began to open fire at a Tops Friendly Market on Jefferson Avenue. Shooting 13, yet killing 10, most of his victims were senior women shopping on a Saturday.

His oldest victim was Ruth Whitfield, 86, who had just finished visiting her husband at a nursing facility. She decided to stop at Tops for something to eat before she went home for the day. Whitfield was the mother of the former Buffalo fire commissioner.

“People were making calls for hours and standing outside of that grocery store to see if it was one of their children or family members who died.” Dr. Nelson who said she worked for months with the city’s mayor and other community members said that they were also furious by the community’s fragile state following the pandemic.

Buffalo, which is 47 percent white, 35 percent Black, and 12 percent Latino, according to the U.S. census, is a key historical town in the abolition movement. Being one of the major stops in the Underground Railroad, and a city that defiantly opposed the The Fugitive Slave Act, a law mandating that enslaved peoples in non-slave owning territories be returned to slavery. On Sunday, the community marched to demonstrate the killings chanting, “We are mourning, we are hurt.”

Buffalo is one of the latest mass shootings out of 198 in the country. Whereas crime has decreased in the U.S., gun violence has significantly spiked. On one hand, the Western New York city has dealt with years of gun violence, but it also battles issues with unemployment, poverty and disproportionate incarceration of its Black community. A 2020 study by the Prison Policy Initiative showed how 43.2 percent of residents in the Leroy neighborhood lived below the poverty line, which was directly connected to the prison pipeline.

The community, which had been slowly putting the pieces of life back together after the pandemic are left more vulnerable than ever.  “This is so exhausting when it happens in our own country—the country that Black people helped build. I am empathetic to those in Ukraine; however, we must take care of our domestic issues before we reach out continently,” Foster furthered.

Mayor Byron Brown, the city’s first Black leader who is serving a third term after a contentious battle with social democrat, India Wells, expressed that the only way to prevent another mass shooting is through gun control. New York Gov. Kathy Hochul agreed, in addition to more accountability for social media platforms.

In a press conference Gov. Hochul called Gendron’s actions an “act of barbarism” and “cold hearted, cruel [and] calculated.” In later talks, she announced that $2 million dollars from the Office of Victim Services will go to victims’ families to support them in receiving “whatever they need” in services. A hotline is also available for those seeking mental health assistance.

To address the growing violence of white nationalist, the Gov. Hochul said that authorities “will be aggressive in their pursuit” of them. Gov. Hochul added that Rev. Al Sharpton said his organization National Action Network (NAN) will pay for funeral sources. NAN has a chapter in Buffalo.

Gendron was charged with first degree murder on Saturday. An interfaith service was hosted by Macedonia Baptist Church to help the community begin healing. 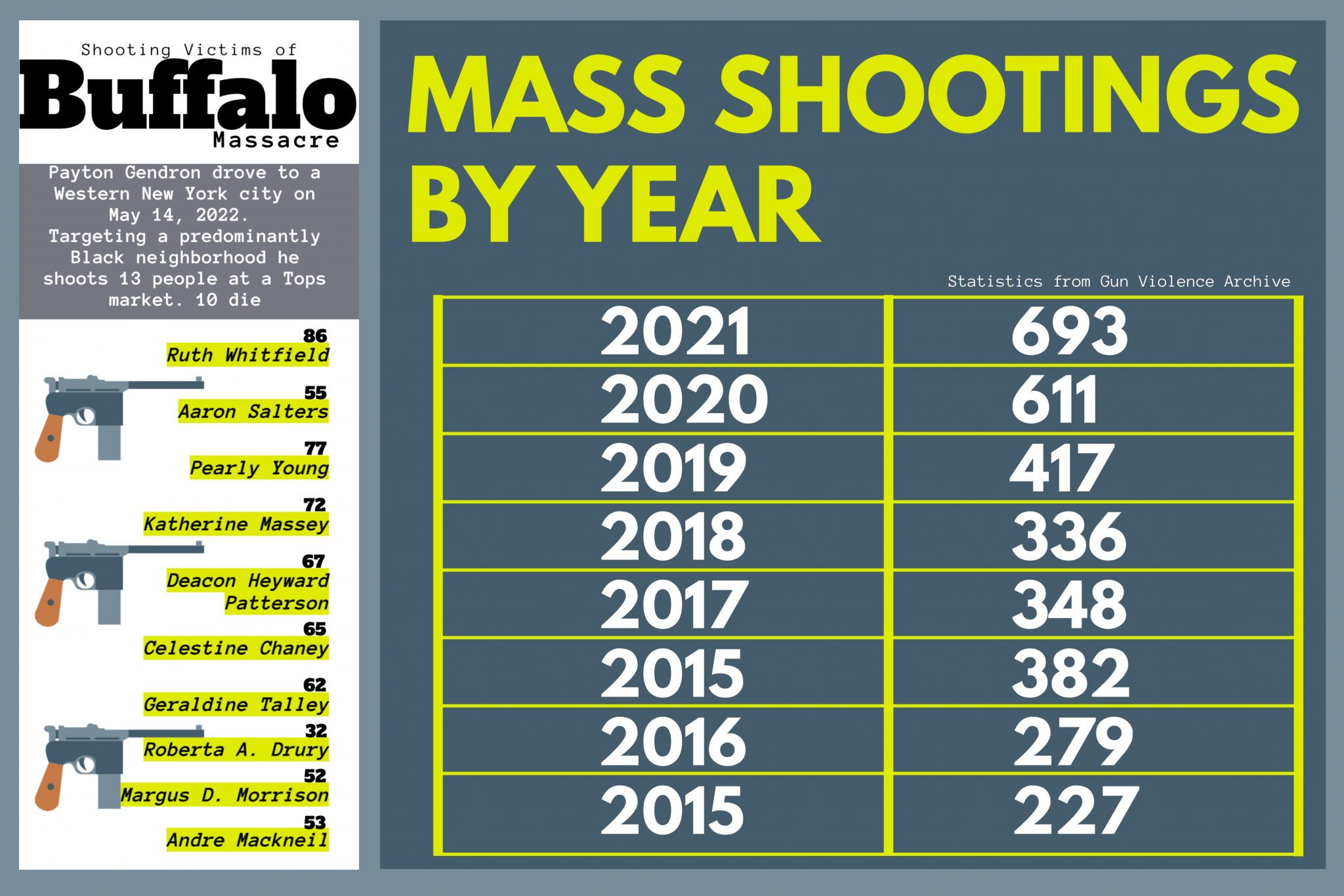