Come through, Newark has fascinating murals on both its old and new towering buildings and walls throughout the city.

Declarations of Newark’s strong art community are stamped on buildings throughout the northern New Jersey city. At several junctures on bricked walls, complicated sigils, or magical symbols, etch out the invisible notes to establish Newark as a sacred space. While wall murals are the largest of its kind, it is not alone. Throughout, these markers regale in both aesthetic and layered messages—all saying, “we are here.”

When you come to Newark, you cannot miss graffiti tags, stenciled airbrush messages on buildings and tattered flyers plastered on poles. However, you can miss some dope art tucked in corners or back streets. So, while here, check out the newest editions launched in a Social Justice Public Art initiative by the City of Newark Arts and Cultural Affairs Director fayemi shakur.

Called #MuralsforJustice the campaign creates art that speaks to the call for racial justice, equity and representation. “Our groundbreaking mural campaign does more than decorate our streets. The murals help expand the creativity of the artists who produce them, they are meant to inspire our community, and they add to Newark’s luster as a home for the arts,” Mayor Baraka said. “These projects bring hope, joy, and help to revitalize our city.”

Themes spanning from movements for Black lives against voter suppression to how social and climate justice overlapped during the COVID-19 pandemic, the artists and culture workers who constructed the murals all stand on the principle that their art reflects their vision that it serves as beacon that directs us towards a better tomorrow.

Here are the specs.

SOJOURNER TRUTH, located on Edison Place just north of Broad Street, by artist Grace Lynne Haynes created in collaboration with Project for Empty Space. The 30-foot high mural commemorates 100 years since the ratification of the Nineteenth Amendment, which gave women the right to vote. Ms. Truth, who died in 1883, spent her life fighting for women’s rights and abolition. “Sojourner Truth was one of the earliest African-American women to fight for the rights and liberties of all American women,” Mayor Baraka said. “While she may have spoken and fought for women’s rights and against racism more than 150 years ago, her message remains as current and important now as it did then. It is truly appropriate for us to honor her work now and carry her message into the future, both through activism and art.”

“Project for Empty Space is a social justice driven, female-led art space committed to cultivating dialogue around important social issues. We believe that it is imperative that we acknowledge the power of one’s voice, action and vote. This work can be a reminder of the impact a single person can have in the race for reform,” said Rebecca Jampol and Jasmine Wahi, co-directors of Project for Empty Space.

THE GUIDING LIGHT, is a mural made by artist Layqa Nuna Yawar in collaboration with photographer Chrystofer Davis and poet Jasmine Mans. Located on McCarter Highway between Edison Place and Lafayette Street, The mural documents both the collaborative creative power present in Newark today, and the collective power seen manifested in protests across the U.S. this year. The contents of the mural is represented in the images captured by Mr. Davis across New Jersey, a poem created by Jasmine Mans and the interpreted mural composition by Layqa Nuna Yawar.

RISE UP FALLEN FIGHTERS is a mural created by artist and President of Yendor Productions, Malcolm Rolling, in collaboration with artists Andrece Brady and Hans Lundy, located on Crawford Street in Newark’s Lincoln Park neighborhood.

Celebrated poet Ntozake Shange is centered as a focal point to represent Black resilience, liberty and justice. Ms. Shange’s smiling image is surrounded by figurative symbols that were unused models of the Statue of Liberty gifted from France to the United States. A life-affirming quote from Ms. Shange’s iconic work, “For Colored Girls Who Have Considered Suicide/When the Rainbow is Enuf,” is also featured. The mural was created in partnership with Lincoln Park Coast Cultural District, the home of Yendor’s beloved late founder Rodney Gilbert. Ms. Shange passed away on October 27, 2018. 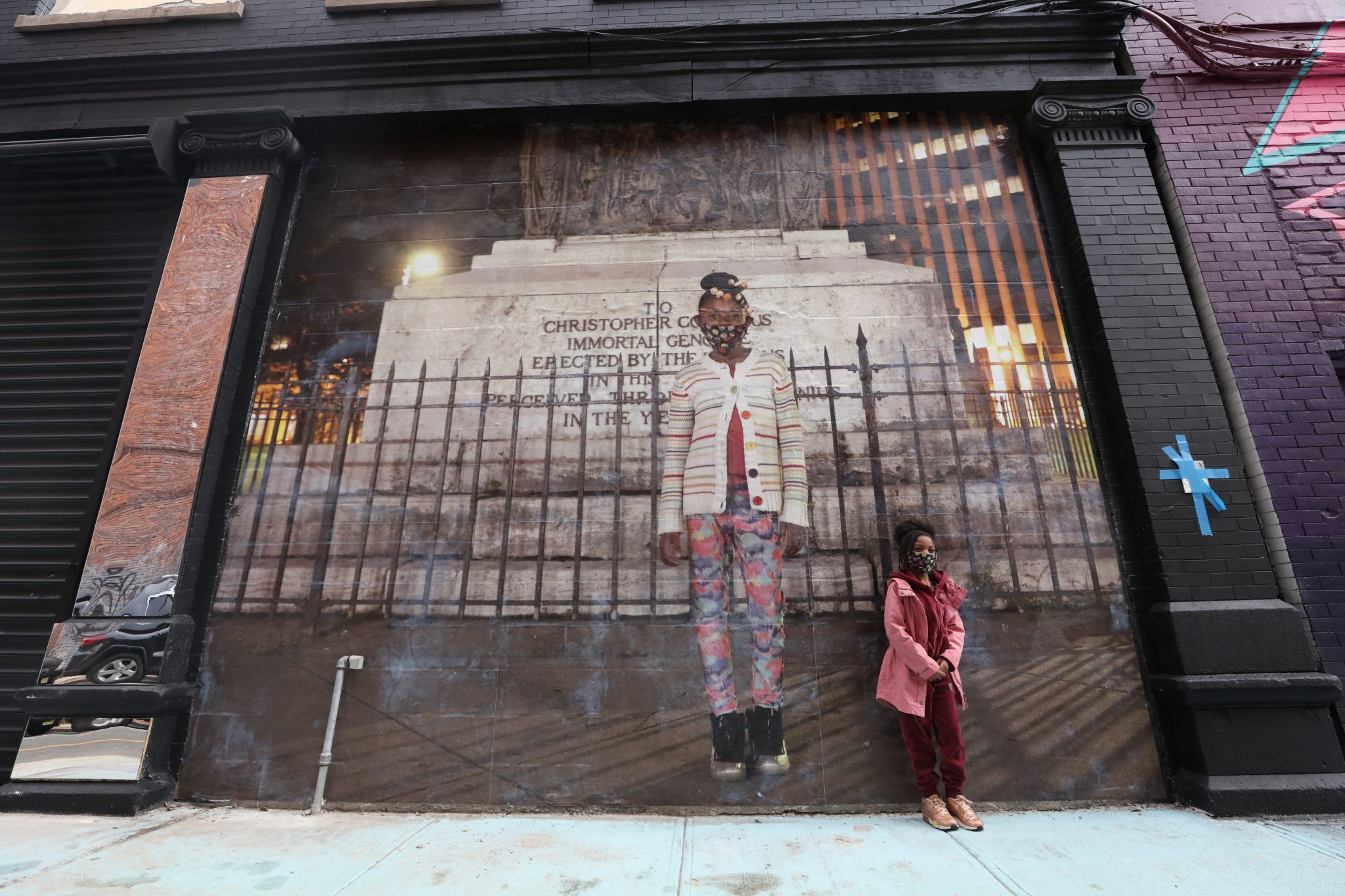 WILL YOU BE MY MONUMENT is a Four Corners Public Art Project completed. The group is one of 40 local art groups who received a grant from the City of Newark’s Creative Catalyst Fund. It is a collaboration between writer Salamishah Tillet of New Arts Justice at Rutgers University – Newark, designer Chantal Fischzang, and photographer Scheherazade Tillet. Photo credit: The City of Newark Arts and Cultural Affairs.

This public art installation, on a four story-building, was inspired by the City of Newark’s removal of the Columbus statue in Washington Park on June 25, 2020. Featuring a photograph by Scheherazade Tillet of Faa’Tina, an eight-year-old Newark resident who celebrated her eighth birthday in Washington Park that night, this work is also made up of reflective typography and acrylic mirrors that Chantal Fischzang designed to structurally connect the installation with the pedestal of the original monument and to reflect the diversity and vibrancy of the people of Newark.

The aesthetic gravitas of the installation greatly adds to the debates about monuments, racial representation, and social justice, while also enhancing contemporary conversations about the ongoing visibility and invisibility of Black girls and young women in the United States.

WHITNEY HOUSTON MOSAIC MURAL, is not in the social justice campaign, but you cannot come to Newark without paying homage to Ms. Houston. Comprised of half a ton of hand-cut glass, the mural was carefully put together by Maude Lemaire. Located at 45 William Street a block south of Broad Street in Newark’s Teachers Village, the visual welcomes you as you go down the drastically changing corridor that was mostly African stores and empty shops less than seven years ago.

“How do we make sure as investment comes back to cities and there’s a lot of focus on revitalizing the physical space, that we ensure that residents are able to enjoy in that economic growth and continue to move up an economic ladder?” Said Prudential Foundation President Shané Harris over a social media unveiling. “And art, in many ways, is a critical driver for social change and community building.”

Ms. Houston, a proud Newarker, passed away in 2021 at 48-years-old. “I think Whitney Houston, who is an icon in this neighborhood and in this community, period, deserves a mural,” Mayor Baraka said. “But more importantly, people get to feel her presence in that art, still reminding them of such a beautiful voice – a melodic voice – and an incredible person.”