Although the Western calendar and social tradition dates the supposed birth of the Christian messiah Jesus in late December–many would beg to differ. Today, Orthodox Christians in the Horn of Africa are celebrating Christmas.

If you are a resident of the Western watchdog, you are already contemplating why you put up the tree and when it is going back in the closet. Although westerners celebrated this past Janus–I mean, January, others are just revving up their ceremonious holiday season, including Ethiopia.

With the exception of leap year, long-time frenemies, Ethiopia and Eritrea, among other Orthodox Christians in the region, annually celebrate Christmas on January 7. The spirit of the festivities, the redeeming theme of this year is overcoming.

Genna is quite different from Western Christmas, which is a fusion of cultural and religious practices from the Middle-Eastern Region all the way up to Norway. Preparation for the celebration begins with a “fast of the Prophets,” or Tsome Nebiyat, 43 days before the holiday, starting November 25. When breaking fast, “traditionally only one vegan meal is eaten each day. It’s a vegan meal because during the fast, foods including meat, dairy, eggs and wine aren’t eaten.” It is a jovial, congruous, yet theologically reverent time.

Christmas Eve, or the gahad of Christmas, is marked by evening mass around 6 p.m. on January 6. On foot, continental  practitioners church hop until 3 am or right before sunrise. Like in many African cultures, oral tradition is central to the event. Chants and melodies fall like snow along the villa style stone carved Ethiopian churches  encompassing the path. Towering like Mexican Adobes, the parade of sorts lasts until the wee hours of the next morning. Then, everyone’s favorite–piquant, tangy Ethiopian cuisine.

“For Christmas day, as kids, we would head to New York, at the time they did not have one Jersey. We spent five to eight hours there, then came back home. [As kids], we looked forward to American Christmas because you got gifts, Ethiopian Christmas [meant] church. Now, I would pick Ethiopian Christmas,” reminisced Ethiopian-American electrical engineer Alemnehe Lemma told the Ark. 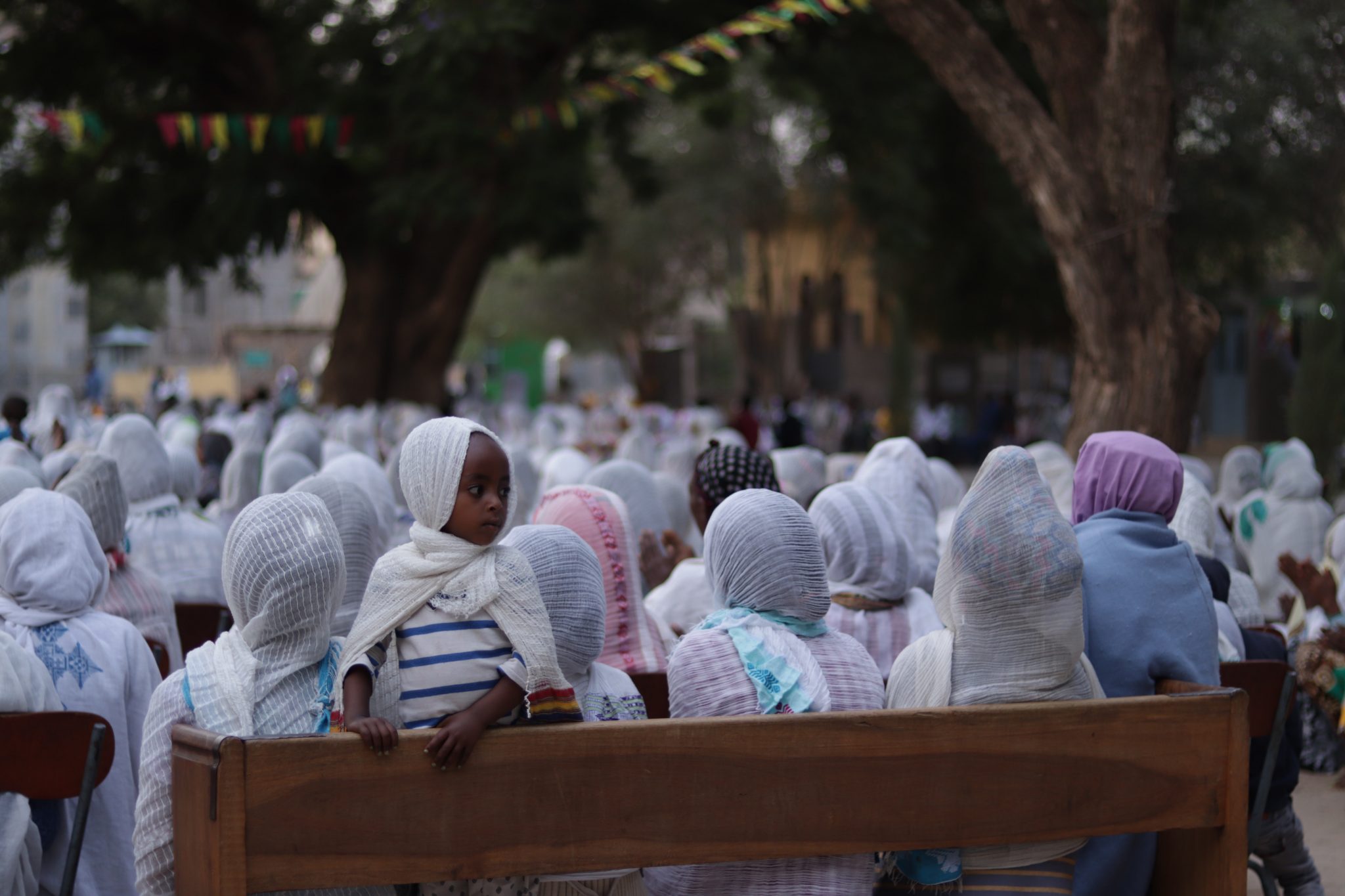 Like many holiday observations involving family and community, food is central to Genna festivities. In Ethiopia, and its diaspora, culinary dishes bring family together while magnifying culture.

“Because [we put] dorowat–chicken in whatever the base flavor of the dish is, alicha–yellow lentil stew, gomen–cabbage-like, collard greens, and injera–the bread you put everything on top of everything, sour because its au’ naturale–all the food we got . . . at church. We would not cook because everyone had food, all traditional dishes. Every year it was something different there.”

The importance of food rings true for the late emcee-philanthropist activist, Nipsey Hussle, who visited Eritrea for three months at 18 years old. “One thing that I noticed when I went over there that’s really different than our culture in America. It doesn’t sound too deep, but it really is, was how everything is based around food,” Hussle told Ebro in the Morning broadcasters in an interview when recalling the importance of families gathering mid-day to eat.

“So imagine, everyday from 12 noon to 3 p.m. the whole city shut[s] down and everybody go home and eat. Only thing open in the city at the time is restaurants . . . but I realized that’s where the bond takes place, over the food, breaking bread with your family.”

Along with the food, is the aesthetic of Genna. During this time, a white Christmas takes on a different meaning. In the “land of 13 months of sunshine,” residents typically wear the pale tint for ceremonial reasons. Customarily, the bronze, red-toned women of the Horn don thinly veiled white Netelas with rainbows of colorfully splashed tibebs, borders. Two-layered handmade cotton garments, Netelas are worn as shawls.

The most popular religion in the world is Christianity with approximately 2.38 billion followers worldwide. Islam comes in second, practiced by nearly two billion. By 2050, population researchers predict Islam catching to the former.

In the Western hemisphere, most follow Christianity based on Roman Catholicism. Hence, following the most widely used civil calendar in the world–Gregorian, or New Style; a solar calendar made up of 12 months with each being 28 to 31 days long. Markedly different from a lunar calendar numbering days within each lunar phase, a solar calendar typically counts a day as a full sunrise to sunset period.

That said, the dating system is widely used for civil purposes, whereas the old-style calendar is utilized for religious observances.

A drastic  jump from the traditional system of timekeeping , some nations  began adopting it after Pope Gregory XIII introduced the Inter gravissimas public decree. Overall, the canonized church law was meant to correct the slightly too long Julian calendar in February 1582. Unsurprisingly, Catholic-centric countries such as Italy, Poland, Portugal, and Spain were the first to follow the new style with many states jumping on the bandwagon post-twentieth century.

Yet, the papal bull, an official decree issued by the pope, maintained no legal authority beyond the Catholic Church and its colonized territories. Notably, the edict was not recognized by Protestants nor Eastern Orthodox churches, like those in Ethiopia.

Until this day, the country uses the ancient Ethiopian, or Ge’ez liturgical calendar uniquely consisting of 13 months. To date, Ethiopia is literally, about seven years behind the times. Because they calculate Jesus’ birthday differently from their Western counterparts, for them it is 2014 rather than 2022.

Regarding religion, World Population review says Ethiopia has a long history of Christianity, having been one of the first in the region to adopt it in the fourth century. Makes sense as Christians now account for two thirds, or 63 percent, of the country’s population. Forty-four percent of which are Ethiopian Orthodox Church members. Having ties with all three major Abrahamic religions, it also has a deep history with Islam, being the oldest Muslim settlement on the continent. Today, one third or 34 percent of residents are Muslims.

To date, the Ethiopian Orthodox Tewahedo Church is the largest Oriental orthodox church in the world. In 1959, it gained its independence from the Coptic Orthodox Church of Alexandria in Egypt. The church headquarters are Holy Trinity Cathedral in Addis Ababa, the capital and largest city of Ethiopia. The denomination is one of the only churches of the monothestic religion to originate in sub-Saharan Africa before Europeans colonization.

To date, the country boasts the world’s second-largest Orthodox population after Russia at 36 million people.

For centuries, and perhaps longer, religion has divided folks. Everything from solar positioning or polarizing beliefs dictate if you are one thing or another. There is enough division. Instead, it may be a better idea to designate the last and first quarters of the Gregorian calendar as special times so the world is on the same page.

Yet, this fabric unites us despite our nuances–cultural, religious rituals of familial togetherness. It seems to be some of the only times the world is not at the brink of war.  Whenever you celebrate whatever you celebrate, open your mind and heart to acceptance. Who knows, you can make new conventions of your own.

The world fell on its knees two years ago. Wiping ourselves off, in reflection, what we

A precursor to its dazzling Carnival, the last quarter of the Italian calendar is rich with

Whether we wanted some or not, we all had to have a slice of humble pie

The Black version of Day of the Dead, La Toussant is celebrated on November 1 and

Death is a celebration, there is no time for mourning. El Día de Los Muertos and La Toussant in the U.S. are old traditions paying homage to ancestors

Death, the great equalizer, whether you’re rich or poor, it does not discriminate. While death is